"An interesting piece of music, like an interesting person, [usually has] qualities that set it apart,” Carl Schachter wrote in an essay on the analysis and performance of Chopin’s music. “When we analyze a piece in preparation for performing it, a useful first approach is often to become aware of its special, idiosyncratic elements and to ask the piece why they are there,” continued Schachter, who has been on the Juilliard faculty for 15 years and is the recipient of this year’s William Schuman Scholar Award. “We may have to work rather hard at our questioning before the piece deigns to give us an answer,” he wrote, adding that “most people wouldn’t answer such a question right away either.”

The lectures begin at 9 am and 10 am in Morse Hall. 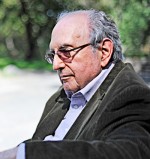 This 2011 photo of Carl Schachter was taken by Mei-Ting Sun (D.M.A. ’06, piano). On February 26 Schachter will give his Schuman Chair lectures.

That Schachter compares analyzing a Chopin piece to paying a visit to an old friend illustrates something essential about his musical approach. Widely recognized as the world’s leading practitioner of the analytical method developed by Heinrich Schenker, Schachter is revered for his outstanding scholarship but also beloved for his poetic, artistic approach to teaching. Much of his professional life has been devoted to teaching analysis to performers, notably at Juilliard (where he has taught Graduate Studies courses since 1998) and at Mannes College (where he has taught for more than 50 years). Among his many students of both theory and piano was Murray Perahia, who told The Journal that he studied counterpoint, fugal improvisation, and Schenkerian analysis with Schachter at Mannes “and found that his command of not just theory but music in general was so complete and comprehensive that it was truly inspirational.”

Pianist Thomas Sauer, who studied piano with Schachter for two years, observed that his former teacher “always places music first, whether he’s teaching an analysis course, giving a scholarly paper, or teaching a lesson,” he told The Journal. “Revelatory as his thinking so often is, it is never self-aggrandizing.” Sauer added that one of his “most treasured musical memories” is an analytical presentation Schachter gave of the Chopin E-Minor Prelude. “As he finished playing, all oxygen seemed to leave the room. I cannot hear the piece without thinking of the beauty of his playing.”

Juilliard (and Mannes) cello faculty member Timothy Eddy said that what he finds “elevating and endearing” about Schachter is that “his illuminating perspectives and insights on musical structure stem from his deep affection and fascination with music. I always feel better integrated from being around Carl, more vividly and fully connected to music and more alive as a person,” Eddy told The Journal. “He guides my search for the intentions and the humanity of the composer by revealing ways that their messages are evocatively embedded in the music’s structure.”

Since 1998, Juilliard has given the William Schuman Scholar Award to an individual who has made extraordinary contributions to the musical community and to arts education. The award was created to celebrate the 50th anniversary of the founding of the Literature and Materials of Music department, which last year became the Music Theory and Analysis department. As part of the prestigious award, the recipient gives two public presentations relating to his or her area of musical expertise. Both lectures will take place on February 26 and are open to the public.

In one lecture, Schachter will speculate that Chopin’s Mazurka Op. 59, No. 2, may be a hidden tribute to Mendelssohn. Years ago, Schachter noticed a peculiar similarity between the openings two phrases of the mazurka and those of Mendelssohn’s Song Without Words in G Major, which had been published one year prior to the mazurka. Initially dismissing the similarity as a coincidence, he later learned that the manuscript of this mazurka was in the possession of Mendelssohn’s wife, Cécile. Further investigation led to an exchange of letters between the two composers.

As Schachter told The Journal, “Mendelssohn wrote that he was constantly playing Chopin’s music, since it was his wife’s favorite, and he asked Chopin if he might send a few notes to her with his autograph. Chopin responded a year later, not with a few notes but with the complete manuscript of the mazurka as a gift to Cécile.” He added, “my fantasy is that it was Chopin’s way of saying to Mendelssohn, ‘You say you are deeply involved with my music, but let’s see if you notice that I was involved with your music, too’.”

Schachter’s second presentation, will be on the movement titled “La malinconia” from Beethoven’s String Quartet in B-flat Major, Op. 18, No. 6. The movement, whose title translates as “melancholy,” relates to a long artistic tradition of depicting the four temperaments, as in Keats’s magnificent “Ode to Melancholy” and well-known musical settings by C.P.E. Bach, Nielsen, and Hindemith. Of the four temperaments (the others are sanguine, choleric, and phlegmatic), melancholy seems to have inspired the largest number of artists. “It is the most interesting of the four because most of life is sad,” Schachter said. “Besides, no one would ever read an Ode to Phlegm.”

Beethoven’s “Malinconia,” which is the slow introduction to the quartet’s frantically joyful finale, stands out not only for its programmatic title but also for an unusually high degree of chromaticism among Beethoven’s early works. “It’s the kind of chromaticism that you get later on, in the Op. 59 quartets,” Schachter said. “My basic idea is that the music takes a wrong turn near the beginning. It’s quite clear that the music wants to go to C minor, but when the chord G-B-D-F is reinterpreted as G-B-D-E#, the music gets lost. This ‘lostness’ creates the sense of melancholy, which is then temporarily dispelled at the end of the introduction.”

These brief musical descriptions offer a glimpse of Schachter as an uncommonly humane musical mind with ideas that flow seamlessly from harmony and counterpoint to aspects of composer’s biography and poetic inspiration and, ultimately, to musical performing and listening. “Learning to analyze means learning to hear in great depth,” Schachter has written. “A good analysis is always verifiable by the educated ear.” 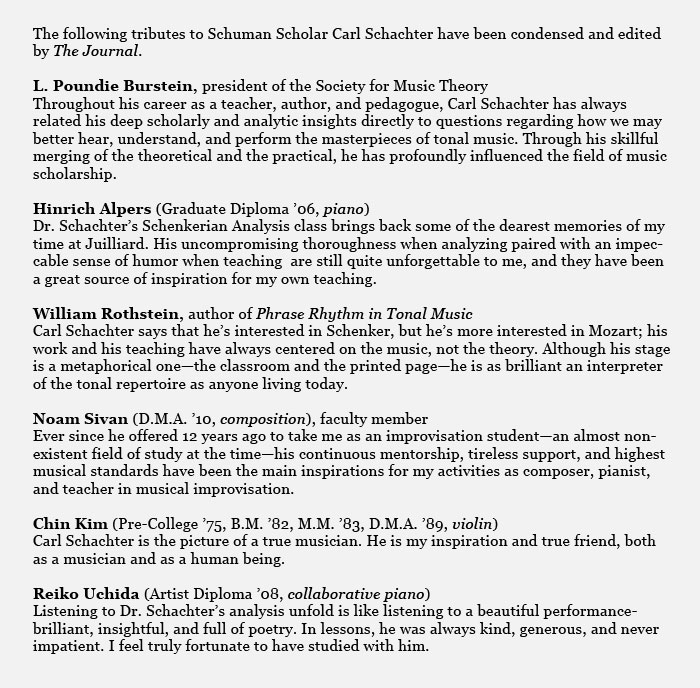