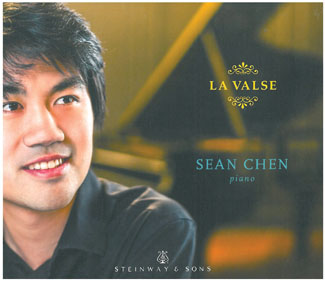 From 1903 to 1907, Alexander Scriabin had an extraordinarily creative period; he wrote his Third and Fourth Symphonies, as well as more than 60 piano works. From the latter, Sean Chen (B.M. '10, M.M. '12, piano) has chosen the Valse in A Flat Major, Op. 38, and the Fourth and Fifth Piano Sonatas, interspersed with gems from Ravel, for this release on Steinway & Sons. Chen shows masterful empathy with the composers' idioms, finding color everywhere on the keyboard and offering carefully considered phrasing without succumbing to the temptation to go for sheer speed.

In Chen's hands, the gentle Scriabin waltz is luminous and nostalgic. It also gives no hint of the wildness that would be a hallmark of the composer's later work, when he began to pull away from tonality. The Fourth Sonata (1903) begins subtly, almost lazily, before the second movement (marked "prestissimo volando") rises to a breathless finish. The Fifth (1907), a favorite of Vladimir Horowitz, is even more demonic, opening with a swift, sparkling arpeggio that sweeps up the keyboard and reappears several times. In both sonatas, Chen maintains clarity in thundering passages and those of glistening delicacy.

He shows equal assurance in Ravel's Valses nobles et sentimentales, as well as the brief Menuet antique, Prélude, and Menuet sur le nom d'Haydn. But for many listeners, the curiosity will be Chen's own arrangement of Ravel's La valse. Working from the composer's versions for piano, two pianos, and orchestra, Chen has created a hybrid that feels closer to the orchestral one, thanks to savvy use of the keyboard's lower range and some voluptuous glissandos. As in the Scriabin, Chen's tempos and phrasing are keenly judged, allowing the waltz to breathe and increasing its weight and impact.

Daniel Shores did the engineering honors, recording Chen at Sono Luminus Studios in Boyce, Va. As with many releases on the Steinway label, the sound is clear, natural, and a delight for the ear. 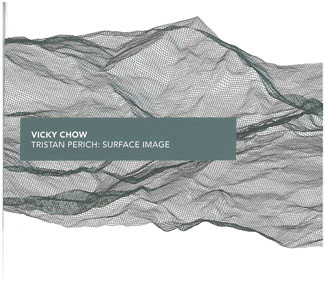 For a unique compositional aesthetic, look no further than Tristan Perich, whose passion is 1-bit electronics. As Perich describes it, "One bit of data is the smallest digital representation of anything: true/false, on/off. It's also the most a chip can produce, usually meant for turning on motors or lights or sending messages to other machinery. It's this uber-reductionist framework that I find really expressive." From this humble material, Perich creates music that is minimal and elegant—and gripping.

This recording of the hourlong Surface Image (2013) was commissioned by Vicky Chow (B.M. '05, M.M. '07, piano). Perich joins her using an array of 40 speakers, which must be an impressive setup in live performance. As Chow begins with a series of ringing chords repeated as an ostinato, the electronics enter, buzzing with robotic precision. As the rapid rhythmic pattern continues, the pitches slowly evolve.

Sometimes the thick texture evaporates, becoming quieter, and the electronic counterpoint is correspondingly light. At others, the piano and the electronics merge to create a shimmering landscape, pulsing with energy. Near the end, a surprisingly moving sequence occurs when the speakers emit a Morse code- like motif—oddly plaintive, like a distress call—as the piano slows to a contemplative crawl. Throughout the demanding time span, Chow maintains admirable consistency in her keyboard touch and overall focus.

Getting the balance right between the piano and electronics was left to engineers Jeffrey Svatek and Stephen McLaughlin, who deserve the highest praise. They recorded the piece at the Curtis R. Priem Experimental Media and Performing Arts Center (EMPAC) at Rensselaer Polytechnic Institute in Troy, N.Y.

The Recorded Legacy of Beverly Sills
Beethoven for 2, 3, and 4