From Barre to Boardroom: How Dance and Consulting Overlap

From Juilliard dance to corporate boardrooms isn't the most obvious career path, but it ended up being the one that Emily Walsh (BFA '05, dance) took—and it turns out that a dance degree can be quite helpful to a consultant. After an injury sidelined her from performing, Walsh, now an associate at consultancy McKinsey and Company, moved into the nonprofit world, working for Sing for Hope (founded by Juilliard voice alums Monica Yunus and Camille Zamora). While she was there, she worked with Christopher Herbert, who's now a baritone in Juilliard's D.M.A. program. They caught up recently. 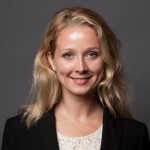 How did you end up at Juilliard?

Growing up in the Pacific Northwest, I always wanted to be a dancer. My mother had started me in classes when I was 4 and it just stuck. When I was a teenager, Juilliard was the school I dreamed about attending, and being accepted in the spring of 2001 was like winning the lottery. On the first day of our freshman year, our ballet class was interrupted by then-director Benjamin Harkarvy telling us that there had been an incident at the World Trade Center. In the days following 9/11, the bonds among my class grew exponentially, and we formed friendships in the first months of school that are still a huge part of our lives today.

As a dancer, what is a key lesson you learned at Juilliard?

Communication. In our second year, our humanities class read an essay by Leo Tolstoy stating that the purpose of art is communication rather than aesthetic beauty. This was a novel concept for a dancer raised in the aesthetically driven world of ballet, but one that I connected with, especially when paired with the new, dynamic types of dance that the program was exposing me to, such as Ohad Naharin's ('77, dance) Gaga technique. The importance of communication grew for me over the next few years, moving my interests more firmly away from ballet and toward modern and contemporary dance. Ballet was the formal, controlled, aesthetically beautiful art form that I grew up with and will always love. However, learning modern techniques at Juilliard was like learning 10 other languages: there were so many possibilities and different ways of communicating. I became really interested in contemporary ballet—fusing free, passionate, and creative modern techniques with the structured, beautiful lines of ballet.

What did you do after Juilliard?

I worked as a freelance dancer in New York for several years, performing with companies including Buglisi Dance Theater and the Only Tribe as well as teaching and doing some choreography. I also supplemented my dance income by working at a restaurant and as a sommelier. After leaving the structured environment of Juilliard, it was a challenging balance ensuring that I was able to make rent and continue to go to class and train while also auditioning for new projects.

But then I sustained a back injury after a few years, and I realized that while I would always love dancing, I was ready for a change from the career of a dancer. So I spent several years at Sing for Hope, where I helped develop arts outreach programs in New York City schools, hospitals, and communities. After spending so many years inwardly focused on succeeding in my own dance career, switching to a more external, community focus was incredibly rewarding.

And then you switched gears again. What made you decide to go to business school?

Having spent my whole life working in the arts and in nonprofits, I started getting curious about the for-profit sector. Who were these folks who sat on nonprofit boards and worked at corporations? What skills did they have that could inform the work I was doing? I had a great mentor who suggested I think about business school, and after an intense application process, I was accepted at Cornell's Johnson School of Business in 2012.

So now you're a dancer-turned-consultant…

I get asked fairly often how a dancer ended up as a consultant, but I actually see a lot of crossover from the skills that I learned at Juilliard. Dance definitely made me versatile and able to adapt quickly, something that has proved valuable since I start working on new projects with new teams every couple of months or so. And much of the work we do—helping many types of organizations address their most pressing challenges—is about communicating ideas. While we use different media than I did at Juilliard, I draw on the same skill set, addressing the fundamental question of "what am I trying to communicate, and given that, what should I show that will be understandable to my audience?" For example, as a dancer, you know in an audition you will probably have 30 seconds before the choreographer forms an opinion of you. That initial impression is incredibly important. Juilliard does a great job of training dancers to walk into a room with presence, putting aside your nerves and self-doubt to make communication first. I've tried to hold onto this training, even though I am now introducing myself to colleagues and clients using words instead of pliés! The context is different, but the initial 30 seconds of impression time remains crucial.