The son of a prominent tenor saxophonist, Joe Lovano was immersed in music from an early age. “Growing up around my dad [Tony “Big T” Lovano] and his crowd shaped my development. Hearing my dad practice and try reeds at home vibrated the house, and I just wanted to create that sound for myself,” Lovano said in a recent interview with The Journal. Sharp Theater concertgoers will get to hear the results when the saxophonist and composer makes his debut with the Juilliard Jazz Orchestra on January 24. 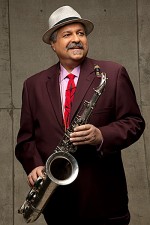 Renowned saxophonist Joe Lovano and the Juilliard Jazz Orchestra will perform big-band arrangements of his compositions on January 24 at the Peter Jay Sharp Theater.

(Photo by Photo by Jimmy Katz)

Hailed by The New York Times as “one of the greatest musicians in jazz history,” Lovano has recorded 29 albums in 25 years as a band leader. He has received a Grammy (for 52nd Street Themes in 2000) and seven more nominations, and his latest recording, Bird Songs, was named the 2011 album of the year by both DownBeat magazine and the Jazz Journalists Association. In it, Lovano and his award-winning quintet, Us 5, explore the works of Charlie “Bird” Parker.

In addition to homages like Bird Songs, Lovano has an expansive catalogue of original compositions, for which he draws inspiration from playing and improvising on others’ works. “There’re so many nights after a concert when I’ve gone back to the hotel and written out pieces, or structures or ideas that led to a full composition,” Lovano said. “As an improviser, you’re always composing within the music you’re playing, and those things fuel my ideas for my own writing.”

Lovano’s recordings showcase his work in ensembles ranging from duets to a full symphony orchestra. “I love to play music and I love to share the space with others,” he said. “To create an intimate environment no matter what size the ensemble is what I reach for. Personal expression within the different structures of the ensemble is a beautiful journey. For me, they all have an equal value. All my compositions come from within, and I try to also compose for the people that I’m going to play with,” he added. “I don’t like to just write a tune and then play it with whoever. Tunes come for me because I want to play them with specific people.” But after that, he has no qualms about playing them with other people in other settings, he said.

While Lovano has given several master classes at Juilliard over the years, this will be his first time joining Juilliard students in concert. He plans to perform big-band arrangements of many of his own compositions, originally written for a diverse variety of ensembles. Among the many albums he will draw from are Trio Fascination (1998), 52nd Street Themes, and his big band and symphony orchestra album Symphonica (2008). “The particular repertoire for the evening hasn’t really been done before,” he said, adding that he looks forward to hearing what the Juilliard musicians will contribute to his music.

Growing up in Cleveland, Lovano began his formal study of the saxophone at the age of 5, and started playing in clubs, sometimes subbing for his father, while he was still in high school. “It was a rich, beautiful environment, and I developed with him that passion for the music,” he said. At Boston’s Berklee College of Music, he further honed his skills as a musician, improviser, and composer. Starting in the early 1970s, he was taking gigs all over the country, including six weeks backing singer Tom Jones. Shortly after moving to New York in 1976, he joined the Woody Herman Thundering Herd, with which he toured intensively for three years. Lovano still tours today and, since 2001, has been a professor at Berklee, where he holds the school’s first-ever endowed chair, the Gary Burton Chair for Jazz Performance.

Lovano is known for having a vast arsenal of different tones and styles. “I feel that I live in the world of music, and I never just focus on one style or another. To develop an approach of your own comes from your personal involvement in the music and the relationships you have with musicians, so I consider myself as reaching to be as creative an improviser and soloist as I can from within the depths of my personal approach,” he said. “Your personal story is the development of who you are as a player, and if you limit yourself to one way of playing, then you’re going to tell the same story every time you play.”

Taking a Step Back: The Value of Liberal Arts
Choreographers and Composers Join Forces