Petschek Recitalist Is No Stranger to Challenges

There’s no doubt about it: Juilliard’s second-floor women’s restroom was not designed to be a place where memories are made. Sitting on the same piece of real estate as the newly refurbished Alice Tully Hall, and a few flights of stairs above Paul Hall and the Peter Jay Sharp Theater, the rather diminutive washroom simply doesn’t play host to the kind of events captured by the imagination and relived for posterity. 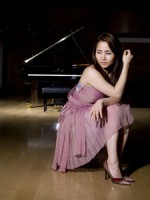 Not so for Di Wu, 24, a second-year Artist Diploma candidate in piano, for whom the space holds a special association. It was there last November where she was unofficially declared the recipient of Juilliard’s prestigious Petschek award. As Wu (pronounced Ooh) recalled in a recent interview, “Tricia Ross [associate vice president for executive projects] walked in and said, ‘Now this isn’t exactly the perfect place to say it, but—congratulations!’ She gave me a hug and I was like, ‘Are you serious?’”

The William Petschek Recital Award has been helping to launch the careers of up-and-coming Juilliard pianists for more than 25 years, guaranteeing its winner a debut recital in Alice Tully Hall. Wu’s performance will take place on May 5 at 8 p.m. with a program highlighting major works of Robert Schumann and Maurice Ravel, and their contemporaries. Showcased on the first half will be Schumann’s Davidsbündlertänze, Op. 6, one of his earliest and most ambitious sets of character pieces. “For me, Davidsbündlertänze represents the essence of Schumann in the best way possible. I don’t think any word can describe love better than this piece,” Wu explains. “It’s not exactly a showpiece, so I’m taking some risk presenting it.”

She will open the program with Clara Schumann’s Mazurka, from her Soirées Musicales, Op. 6, from which her husband quotes in the first of his Davidsbündlertänze. Wu’s pairing of the two closely linked works underscores the intimate bond between the two lovers, offering a musical representation of Robert and Clara’s nascent love and subsequent engagement.

If the first half of the program represents romance and unity, the second half explores the opposite. Having chosen Ravel’s notoriously difficult Gaspard de la nuit as the centerpiece, Wu surveyed the repertoire for concurrent pieces which embodied the variegated musical landscape of the time. She settled on two works: Nicolai Medtner’s Skazki, Op. 20, and Arnold Schoenberg’s Drei Klavierstücke, Op. 11. “Medtner is a very underrated composer,” Wu explains, “but he was considered the greatest composer of his time by Rachmaninoff. Some called him the ‘Brahms of Russia’—he still has the thick structure, with the melancholic melodies of the Russian school.”

Brahms also provided a significant model for aspects of Schoenberg’s own aesthetic, as can be seen in the pianistic writing of his Klavierstücke, one of the first works to make free use of the chromatic scale without a fixed key-center. While often mischaracterized as departing significantly from Romantic scruples, Schoenberg in fact saw himself as fulfilling the inevitable course of tradition through its disintegration of tonality and, in his own words, eventual “emancipation of dissonance.”

Ironically, it was Ravel who saw himself as splitting more acutely with the Romantic tradition. Of Scarbo, the third piece in his Gaspard de la nuit, Ravel said, “I wanted to make a caricature of Romanticism, but perhaps I let myself be taken over by it.”

For Wu, the unlikely trio of Medtner, Schoenberg, and Ravel offers a snapshot of the many divergent styles to emerge in the early 20th century. “I was so happy to find such stylistically different pieces,” she says. “It’s challenging, because the techniques you use to approach each piece are so different, but I like challenges, so I’m going to try to do it.”

Wu, who was once double-booked as a soloist in Carnegie Hall, is no stranger to challenges. Last year she toured with a program titled “The Art of Transcription,” featuring, among other transcendentally difficult works, Godowsky’s seven studies on Chopin’s “Black Key” Étude and Liszt’s Figaro Fantasy. Her recent schedule has included a U.K. tour, a solo performance at Rockefeller University, and a performance of Rachmaninoff’s Third Concerto in the Kimmel Center in Philadelphia.

As external pressures mount, Wu has found that the most formidable struggle comes from within. “When you get on stage, you’re not competing with anyone directly ... you’re just competing with your own mind.”

For Wu, such challenges would have been impossible to overcome without the guidance of her teachers. Originally from Xiamen, China, she gave her professional debut with the Beijing Philharmonic at age 14. As result of that exposure, she was invited to study with Zenon Fishbein at the Manhattan School of Music’s pre-college program. The next year she was accepted to the Curtis Institute, where she spent the rest of her high-school and undergraduate education as a student of Gary Graffman. “I have a great relationship with him,” she says. “Not only did I learn piano from him, but also how to be a better person.”

After Curtis, Wu received her master’s degree from Juilliard under the tutelage of Veda Kaplinsky. “She was sort of the mother; I remember talking about boyfriend troubles, and things like that. She’s sort of like a psychologist in certain ways—always straightforward and clear ... I really enjoyed working with her.”

Wu currently studies with Joseph Kalichstein and Robert McDonald as a second-year Artist Diploma student. Despite her hectic schedule, she notes how caring both teachers are in making time for her when she is in town.

Years of world-class instruction have complemented her own intrinsic drive to create and overcome obstacles, allowing her the unique privilege of focusing solely on her artistry. Her Alice Tully debut will offer yet another challenge, which she is more than prepared to confront. “I just have to present music that I really love and cherish,” she says. “When you play pieces like that, you will have no regrets.”