Bassist and cellist Ron Carter grew up in Ferndale, Mich., and later Detroit. He received a bachelor’s degree from the Eastman School of Music in 1959 and a master’s from the Manhattan School of Music in 1962. In addition to being part of the legendary Miles Davis Quintet in the 1960s, his performing career includes gigs with a true who’s who of jazz including, among many others, Lena Horne, Bill Evans, B.B. King, the Kronos Quartet, Dexter Gordon, Wes Montgomery, and Bobby Timmons. He has won two Grammy awards, and among his most recent accolades was being honored with the premier French cultural award, Commandeur de l’Ordre des Arts et des Lettres. A distinguished professor emeritus at City College and former faculty member at the Manhattan School of Music, Carter has been on the Juilliard Jazz faculty since 2008. 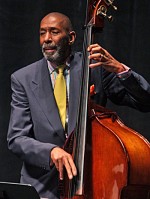 When I was 11, the band director for my school district went to all the schools and asked the students, “which instrument do you want to play?” and I decided on the cello. Within a year, I went to a Detroit Symphony concert and heard Georges Miquelle play a Saint-Saëns cello concerto—I can still hear it in my ear right now.

Ms. Mildred Batchlor was my first teacher, and she was very encouraging to me. She assured me that I was a big talent who could make some wonderful music.

Why did you switch from the cello to the bass, and when did you start playing jazz?

We had moved to Detroit when I was in high school, and at that time in Detroit they weren’t giving me the opportunities to play that they were giving the white kids, but when I started playing the bass, they had to let me, because I was the only one playing. In about 1954 or ’55, around my last year of high school, I started playing jazz gigs to pay for a bass and lessons.

It was by the Modern Jazz Quartet, and I first heard it on the radio and then I found the LP. I was about 17 or 18—still in high school. Its significance was the arrangements, the melodies, the sound of the string bass ...

What’s the most embarrassing moment you’ve had as a performer or in your career?

Rio de Janeiro, where everyone plays the guitar. I went there for the first time about 15 years ago with Tony Williams and Mulgrew Miller for a free jazz festival. The most notable thing about Rio, other than the music, was the level of poverty in the favelas. You hear about it, but I was still stunned to see it.

I would like to be a race-car driver. I love racing cars, although I don’t have as much time to do it as I’d like. I took a course at Pocono Raceway about five years ago, and I’m trying to find time next summer to go to a course that Audi is giving in California.

Michael Connelly’s Nine Dragons—he mentions my name in it! The main character in his books is Harry Bosch, a detective who likes jazz. He injects several jazz players into each of his books.

A person can have a great meal and hear great music almost any time in New York. I just got back from Europe last night—I did three concerts in three cities—and after we were done, it always looked like Sunday night: Nothing was open or going on.

Hanging out at the beach! I love to go anywhere where there’s sun and sand and a low cost of living. I’ve lived in New York City since 1959 and since then I’ve been to the beach about three times.

How has your teaching changed over the years?

I have become much more patient. As you get older, you start to allow one more mistake that you wouldn’t have allowed this time last year. I’ve learned to let the second mistake go by, but not the third or the fourth.

I’d want them to remember how important it is to practice with an honest ear. I think in general, students need to listen more productively, whether they’re playing a scale or a phrase for an étude. Not listening with a self-critical ear makes their progress slower—they don’t make strides honestly enough.

Do you feel you’ve learned that lesson? And if so, when did you learn it?

Well, when you’re at a school that has a low ratio African-American to white students, you have to find ways to tip the balance in your favor. But I’m still working at it. I’m doing O.K.