A more meteoric rise can hardly be imagined than that of bass-baritone Shenyang, who less than two years ago exploded out of relative anonymity as a student at the Shanghai Conservatory to win the 2007 BBC Cardiff Singer of the World competition. Since then, the 23-year-old singer has appeared with artists including Daniel Barenboim, Antonio Pappano, and James Levine at venues around the world. In New York, he was most recently seen in the Juilliard Opera Center’s Triptych conducted by James Conlon. This year will witness his debut at the Metropolitan Opera as well as his first New York solo recital (with pianist Vlad Iftinca), as the recipient of the 2008-09 Alice Tully Vocal Arts Debut Recital Award. 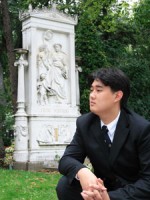 A diligent worker who is constantly challenged by the demands of both the Artist Diploma program at Juilliard and the Metropolitan Opera’s Lindemann Young Artist Development Program, Shenyang’s young career might be described as the union of careful preparation and sheer felicity. In fact, participating in the Cardiff competition wasn’t even originally part of his plan. But his colleagues and teacher convinced him to enter less than 24 hours before the contest's Chinese auditions.

Shortly after discovering he was advancing to the main competition, Shenyang was selected to sing for Renée Fleming in a master class at the Shanghai Conservatory that she gave in conjunction with a recital tour of China. The pressure was high, and the result unexpected. “We had four singers in that class and an audience of 500,” said Shenyang in an interview. During the class, he mentioned that he was preparing for Cardiff, which prompted a very quick reply from Ms. Fleming: “Do you need any help?” “I could not answer,” Shenyang said. “I didn’t want people to think that I am the kind of person who gives Renée Fleming his business card.”

Fortunately, Ms. Fleming spared him from his own modesty, and contacted him after the class, letting him know that she was serious about offering her help. She arranged for Shenyang to visit New York, make some professional contacts, and work with some local coaches.

Shortly after that trip, it was time to go to Cardiff. “I had no time to get nervous,” he said. “I can’t remember how many interviews I did in Cardiff. My first TV interview was in English, [as was] my first radio interview. It was so hard for me. I mentioned several times to the media people, I don’t care about the prize. I just want to show my best to the audience and to the jury. That’s all. Something about my repertoire, my personality, I guess I showed something really special.”

But the moment the winner was announced was not exactly joyful for Shenyang. He described having watched the reactions of previous winners to the good news. “Most of them were totally happy, like they just made a goal in soccer, but I was not. I realized it’s a very heavy thing [resting] on your shoulders, which means you cannot be bad. You cannot be nothing. You have no choice. If you get that prize and in the future you have nothing, it’s worse that not coming to Cardiff or not winning.”

Even under pressure, singing is not enough for Shenyang. “To me, that’s only a small part of it. I really like all music: classical, chamber, symphonic, piano, opera. I like singing, but you have to really know all about music, not only say, ‘I have a good voice. I can sing good high notes.’ That’s nothing. If you are a singer and want to sing lieder, but you don’t know any symphony of Brahms or any piano work by Schumann, how do you know your song?”

For Shenyang, repertoire is very important, and his tastes lean to the psychologically penetrating side. He tends to avoid performing what is very familiar, and hopes his audiences will leave his performances having deeply engaged with the composer and the poems. “You can sing [Schubert’s] An die Musik or Erlkönig, [but] it’s too simple, it’s too popular, even if you can do it very well. You have to find something particular for you and really useful for your style, your voice,” he advised. Hugo Wolf is a personal favorite. “Every piece is like a treasure, like a small novel. [Wolf] spent a lot of time on it, and we should think about it. We should try to feel something about the poems, about that kind of drama.”

An avid collector of classical recordings, he owns more than 2,500 CDs. His favorite conductors are Furtwängler and Szell, and he reports owning seven or eight different versions of the “Ring” cycle. Excessive? Not for Shenyang, who explains, “I’m not a singer who likes music. I’m a music lover who works as a singer.”