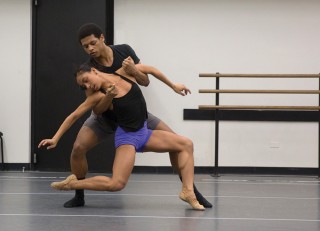 Each spring, Juilliard Dance presents a program of repertory classics. The challenge for the dancers is to honor each choreographer's intent while keeping the movement as alive as when each piece was first danced. This year's program, which begins March 22, opens with Richard Alston's Sheer Bravado. It's set to Shostakovich's First Piano Concerto, which will be performed by master's student Kevin Ahfat with the Juilliard Orchestra conducted by Nimrod Pfeffer. The second dance is Spanish choreographer Nacho Duato's Por Vos Muero, which is set to 15th- and 16th-century-inspired music created by Jordi Savall. The program closes with Mark Morris's V; it's set to Schumann's Piano Quintet, which will be performed by Juilliard musicians. Dancers performing in each of these iconic works spoke about them with the stagers. 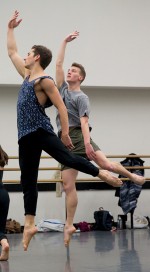 Nacho Duato's Por Vos Muero (I Would Die for Thee) (1996) begins in a dream state. The dancers float, running slowly toward an unattainable attraction, moving their limbs in an endless, circular motion to the words of the 16th-century poet Garcilaso de la Vega. The calm is broken by a stream of ornamental Baroque music; the first duet begins. This piece is a delicate balance of control and release, a quality that is both marvelous and difficult to attain.

“Less! Do less!” Gentian Doda tells a couple contorting and weaving beautifully in front of him. He claps his hands three times and the music stops abruptly. The dancers, panting, stand waiting to hear what this passionate force has to tell them. An assistant to Nacho Duato, Doda works with companies around the world to stage Duato's ballets and is also a choreographer in his own right.

On the first day of rehearsals, Doda told us, a cast of 12 men and women, that his most important mission was to teach us all the style and nuance of Por Vos Muero. We were about to embark on a journey to learn not only the choreography but also a whole new movement philosophy. As we began to work, Doda urged us to relax in our movements yet maintain precision and clear technique. He insisted that we deliver the steps with confidence even before we were comfortable with the sequence of movements. In a mélange of English, Spanish, and body language, he communicated the concepts necessary to understand not only the choreography for Por Vos Muero, but also the Duato style as a whole. He insisted on a balance of efforts between the partners in a duet; the woman has to let go and trust the impetus of her partner.

For me, the power of Por Vos Muero lies in its paradoxes. The tension between the impetus of the movement and its execution is what gives the dancers a vulnerability and the ability to be natural. I felt this the first time I watched the dance, before we started working on it, but now as I listen and adapt to Doda's corrections, I see that the movement philosophy is applicable to the dance as well as to life in general. In this dance about juxtapositions, there are many valuable lessons about being a dancer at Juilliard. In rehearsals, we get a true taste of the professional working world as we translate the hours of close technical study and adapt to the choreographer's stylistic choices and desires. The tension and the at times uncomfortable paradox present in Por Vos Muero make the complex movements beautiful, bittersweet, and irresistibly human.

‘Whatever it is you feel or don't feel, or see or don't see, that's up to the viewer,” said Michelle Yard, who's staging Mark Morris's V for Juilliard this spring. In short, the goal of this work is not to tell a story; the goal is precision, both rhythmically and spatially. For Morris, this allows the audience to create its own experience within the framework he has set up. Whether you laugh or sob, the piece remains the same: a composition of physical images, made for the viewer's consumption.

Second-, third-, and fourth-year Juilliard dancers are getting a firsthand taste of this kind of work by performing V, which Yard, recently retired from the Mark Morris Dance Group, describes as being “like notes on a page,” with the dancers representing the notes.

V, which was created in 2001, has been thought of as everything from a demonstration of evolution to a story about a community rising from the ashes after the September 11 attacks. While Morris did not intend for his work to represent such events, when you leave the concept up to the audience, they can, and often do, run with it.

In creating new work, Morris's “inspiration is the music,” Yard said. In the case of V, it was Schumann's Piano Quintet, and once Morris had chosen it, he began digging for the dance within. The choreographic foundation—what everything points to—is a grand V. There are two groups, blue and green, which each act as one side of the V.

To begin, the two groups perform a nearly identical phrase, their arms in opposing diagonals, which if conjoined create a V, but due to tricks of timing the two sides never quite match up. This motif of the arms shows up throughout the whole 31-minute piece, sometimes broken in half, with one arm, and sometimes both arms wrapped around another dancer. This same motif is also used in partnering to lift or to add to the shape of another dancer. The most prominent use of the V is in Morris's formations. Several times during the work, the dancers create a large V, and when they're not in this complete shape, they're placed around the space to represent different sections of it.

Our job as dancers in this piece is precision. “Every single time you come back to the V,” Yard said, “it has to be the exact same, side to side, up to down.” Morris has taken this image, a simple letter from the alphabet, and transformed it into the architecture of a dance. I look forward to hearing what kind of experience you paint inside this framework.

Art, at its finest, should continuously live and breathe, and what sets dance apart is that in order to survive, it must continue to develop within the human body, mind, and spirit. Richard Alston and Martin Lawrance not only allow room for this notion, but encourage it. Alston created Sheer Bravado for Ballet Theatre Munich in 2006. Eleven years later, we have the privilege of breathing life into this piece once more, with the understanding that we are our own unique collective of artists and therefore will bring different nuances within the form and narrative of Alston's original yet ever-evolving creation.

We're so lucky to be working with Lawrance, who danced with Alston's company from 1995 until 2007, when he became the rehearsal director, and whose positive energy and focused yet fun personality light up the studio. When asked what he enjoyed most about Alston as a choreographer, Lawrance talked about the joy of “working for someone who loves music. He's such a musical choreographer; there's a marriage there.” And that musical quality made Alston an ideal candidate to dive into Shostakovich's Piano Concerto No. 1, to which he set Sheer Bravado. The music takes the listener on a journey of unexpected mysteries with an assurance that contrasts with the uncertainty that lies beneath the music's surface and history.

Sheer Bravado begins with a male dancer dancing to the solo piano. He is soon interrupted by an ensemble bursting forth with gusto, and his character is eventually forced to mask his introspective and vulnerable qualities with a surface of bravado. As Lawrance said, “Like Shostakovich this is a figure who, struggling to keep his own mind and spirit, has to conform at the end of the day leading a crazily happy dance to the circuslike trumpet fanfares of the finale.”

A Juilliard Evening Division class called Rooted in Music: Alston, Duato, and Morris takes place on Mondays and a free ticket to see the performance is included in the fee.