Bridging a Divide in Music 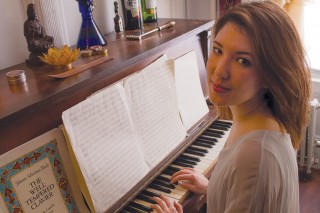 The 2016 presidential election was a testimony of a divided nation, and the serious ideological rift in the current political climate suggests a faltering civic discourse. As a composer, I frequently question the role of music within today's polarized society. The world of art consumption has also become divided; the classical concert-music culture has a reputation for elitism, and within it, the new music scene has further alienated its audience with intellectual exclusivism. In the midst of our escalating sociopolitical divide, this attitude of artistic isolationism seems to me reckless and reprehensible. I hope to address this concern in the form of personal artistic goals and alternative models of art consumption. The most immediate responsibility for me as an artist lies in the vision of my work itself. Whether the opulently ornamented style of the French Baroque court music, the textural and formal clarity of the Classical enlightenment, or the chromatic unrest of the late Romantic subjectivists, aesthetic trends not only reflected but also reinforced cultural values of their time.

In considering trends in new music, I wonder what sort of cultural and social values they reinforce. Certainly not inclusiveness; rather I see intellectual exclusivism and individualism. Understanding the oversimplification of a more complex issue, I want to envision music on a spectrum of complete fulfillment to defiance of expectations: excess fulfillment results in monotony, while defiance in unintelligibility. I believe that our own expectations lie somewhere in between and hope to fluctuate within this familiar tension between fulfillment and defiance of expectations in my own music.

Much of the music being written today errs on the side of unpredictability, and I believe that this has strongly contributed to the isolationism of new music; themes, phrase structures, rhythm, meter, and form are abstracted to such a degree that anticipation is hardly possible for the lay listener. While innovation is integral to musical progress, and while personally I believe unequivocally in the need for intellectual rigor and diversity within the arts, I have also become aware that the normalization of intellectuality has overpowered other aspects of artistic merit, such as the simple ability to build a community.

This thought brings me to my concerns regarding the culture of music consumption. The concert-hall culture began in the 18th century and became popularized in the 19th century. It is curious that this tradition has remained largely unchanged despite nearly three centuries of social, cultural, political, economic, and technological advancements at the global level. While preservation speaks to its success as a model of art consumption, I wonder if it may not also speak to the decline of audience engagement and financial deficiencies in the recent decades.

Current trends in popular music point toward the demand for dance music, which is spontaneous, social, and participatory in nature. While none of these values are represented in the mainstream trends of music venues, a number of recent entrepreneurial projects that embrace social values such as Le Poisson Rouge, National Sawdust (founded by composition alum Paola Prestini), and the Virtual Choir (created by composition alum Eric Whitacre) have proved enormously successful. Each enterprise has exponentiated audience engagement to encompass much more diverse demographics. These alternative models have revealed that questioning simple practices such as lighting, seating, ticketing, and etiquette formality can yield a profound result in popular interest. As an artist in an age where entrepreneurship and business innovation are significant cultural and economic forces, I see a tremendous opportunity for revising our models of art consumption to embrace values of the society we aspire to build.

While it is tempting to point fingers toward political figures for the current state of civic divide, the more productive and responsible action is to question one's own involvement and complacency within the divide. The culture of new music has been, unfortunately, likewise guilty of reinforcing divisive values such as elitism, intellectual exclusivism, and postmodernist individualism. My vision as an artist is to create music and the kind of listening experience that reinforce the values of egalitarianism, intellectual inclusivity, and community enrichment.