A Black Theater Festival Is Born at Juilliard 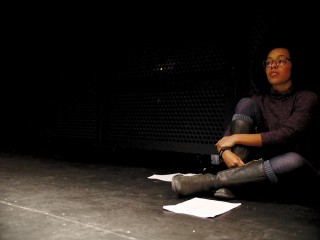 Brittany Bradford, who holds a Jerome L. Greene Fellowship, is a fourth-year drama student. She's also a co-founder and the artistic director of HomeBase Theatre Collective, which had its inaugural production—a theater festival of eight works created by black playwrights and directed by black directors for more than 30 black N.Y.U. and Juilliard actors—at Juilliard's Willson Theater. The goal of the festival, Bradford said, was “artistic fellowship and unflinching exploration of theatrical works in order to open conversation and opportunities for the next generation of artists.” She recounted the 48 hours leading up to the festival, which took place on January 8.

Time and time again, I've heard directors liken putting a show on its feet to giving birth. If this is true, the creation of our very first HomeBase event was akin to a healthy, calm deep-breathing, meditative labor for eight months and three weeks—and then suddenly water breaking in a taxi while stuck on the interstate with all hospitals at least 50 miles away, and doctors? Extinct! What we experienced in the 48 hours or so leading up to the first of two performances was a crash course in theater creation with more unexpected twists than I could have imagined and moments that were more beautiful and perfect than I could ever had hoped for. I wouldn't trade that birthing process for anything else in the world.

The day before our first show, 3 pm Gather, gather, gather. In record time, we collect all of the props/set pieces from various drama rooms to load into the Willson.

4–7pm Dry tech. With the help of our incredible stage manager and quick thinking, we do a dry tech of all 12 pieces. We're hoping we can shave off some valuable time tomorrow by going through this process today.

9pm Headshot, headache, resolution. After getting our headshots, we have to figure out how to hang them up without ruining the outside of the Willson. We end up with a headshot row in the hallway approaching the theater that wonderfully showcases all of the beautiful black people involved.

Midnight Escape. We feel like we've accomplished as much as possible before our one and only tech tomorrow morning. Now to get some shut-eye before our marathon begins!

6am Wake up and get going. Stop by Absolute Bagel on my way to Juilliard to be able to feed our artists, who are so generously giving their time.

7:30am Green room set up. Stock Room 335 with food, drinks, snacks, and paperwork that will have to be filled out throughout the day. The artists start arriving at 8.

9am Tour of the space. Half of our collective are N.Y.U. artists who have never been in the space before; most of the Juilliard actors have only been in it for showcase.

9:15–10:15am Transition rehearsal. We somehow go over all of the transitions and find we're 15 minutes behind, but hoping to pick up some time later on.

10:15–11am Final number. The number that's closing out the piece is beautiful, but much of the ensemble hasn't learned it yet. Rock stars that they are, they gather in the green room and pick it up quickly.

11am–1pm Lost time. Remember that 15 minutes we were going to pick up later on in the day? We've actually lost 15 more minutes as all of the pieces are rehearsing in the space for the first time. Steph Marron, our stage manager, graciously allows us more time on stage and agrees to push back the house opening.

1:30pm Quick decisions. We're just finishing up our tech, and still have to pre-set for top of show. We're scrambling to make sure things are where they're supposed to go, actors are in place, front of house knows all of the pertinent info, etc. We also make a quick executive decision that, based off of the recent run times of the pieces, we're going to need an intermission. We pick a spot in the show, decide to call an audible and let the audience know it's happening verbally, and recognize everything else in the day will also be kicked back timewise. That's live theater.

2:30pm Fingers crossed. Part of our plan is to feed the audience and actors in the lobby after the first show, so people can mix and mingle. One of our founders, Brandon Homer, leaves to pick up the food—we've made time for this to happen, but if something goes wrong at the restaurants, we don't really have a backup. Keeping our fingers crossed as we set up the lobby.

4:30pm Celebrating. The first show ends and the majority of the audience stays for our little shindig in the lobby (the food arrived without a hitch). It feels surreal to see people from N.Y.U. and Juilliard as well as friends and family all gathered together to celebrate some black excellence. It's an emotional and moving experience.

5:15pm Clear the lobby. Time to get ready for the next show!

6pm Notes. Going over the first performance—what worked and how to fix any flubs. The ensemble practices the song on the stage, something they didn't get to do earlier because of time constraints.

6:30pm Half-hour call. The space is pre-set for top of show, and we're moving along much better than before. When the house opens at 6:50, it's clear it's going to be another full one.

7:30pm Doing everything at once. Because the show is longer than we originally anticipated, we know we've got to start cleaning up—the lobby, the green room, backstage, the props, and the food station now, while the show is happening, to be out by our assigned end time of 10pm.

9:30pm Closing number. I give myself a chance to just sit and watch, and I can't help but cry. Not only is the song inspirational, but it truly feels like we are making history on that stage: the first of many HomeBase productions.

9:45–10pm An exciting road ahead. After a short meet-and-greet with the audience, we finish clearing everything out. The founders all take a minute to recognize what we accomplished in just six months and the exciting road we have ahead. Even with all the hiccups along the way, the show happened, and was an incredible success!