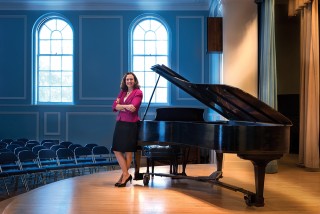 In February, the Andrew W. Mellon Foundation announced an unprecedented $2.53 million grant to a consortium of Philadelphia music education organizations to increase diversity and improve young musicians' preparedness. The lead partner in the consortium, which includes the Philadelphia public schools, the Philadelphia Orchestra, and others, was the 109-year-old Settlement Music School, whose chief executive officer is Helen Eaton (Certificate '94, viola).

Helen Eaton came to Juilliard in 1991 from the University of Pennsylvania intending to be a performer, but it was tutoring international students in writing here that helped lead her to a career in music education and administration. “The reason I was interested in teaching writing to international students is the same reason I taught violin and viola for many years,” Eaton told The Journal recently. “I find that when I work with students, whether children or adults, I learn something in every interaction. I want to understand how they learn best, and to do this you have to be willing to listen carefully and adapt. When teaching is done well, it has a profound impact on people's lives.”

The English tutoring may have started as a work-study job, but Eaton ended up loving it. When she was studying for her master's in musicology from the University of Chicago, she also taught at the Merit School of Music, and it was there that she happened into arts administration and ultimately realized it was the field for her. In 2010, she was recruited by Settlement, one of the highest regarded and oldest continuously operating settlement schools in the country, to be its sixth executive director. She and her husband—freelance musician Guillaume Combet (Advanced Certificate '94, violin), who now teaches and is a chamber music coach at Penn—moved east.

Settlement has more than 5,000 students at its main and five branch campuses in the Philadelphia area, and provides more than 10,000 weekly individual lessons, classes, and activities in music, dance, and visual arts to children and adults along with providing more than $2 million annually in financial aid. When she took over, Eaton said, “we were providing thousands of lessons, classes, and ensembles on a weekly basis at our branches, but we challenged ourselves to think about those students who were still unable to reach us.” She and her leadership team identified community engagement through partnerships—“taking us beyond our branch doors—as a key area of growth and opportunity for the school.” They set a goal of transforming the branches into neighborhood meeting places that could provide adults as well as children with a sense of community. “Something magical happens when children walk into the buildings and are delighted by what they see,” Eaton said. “The buildings don't have to be fancy, but they need to reflect the respect you have for the families who are taking the time to invest in their children's education at your institution.”

During her tenure, Eaton has expanded community engagement by offering programming at social service agencies, homeless shelters, parks, libraries, and retirement communities. “We bring teachers directly to where the students are,” she said. Settlement also initiated partnerships with many schools in Philadelphia. At one, for instance, Settlement provides an intensive after-school band program, and last summer, one of the students, a percussionist, was chosen to do a side by side with NYO2, a Carnegie Hall Weill Music Institute summer training program, when it was in Philadelphia last summer. “He would never have been able to do this had we not brought the teachers and program directly to him,” Eaton said.