Violinist Ruggiero Ricci, who served on the Juilliard faculty from 1975 to 1979, died of heart failure on August 5 in Palm Springs, Calif. He was 94. A virtuoso who made more than 500 recordings and gave some 5,000 concerts during his 70- year solo career, he retired from playing at 85 although he continued to give master classes. His most recent one at Juilliard was in 2003; it focused on concertos by Mozart, Elgar, Dvorak, and Brahms. 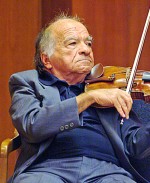 Ricci was born in San Francisco in 1918, though for many years his birth year was given as 1920 to make him seem even more of a prodigy. His Italian parents gave him the Anglicized name Woodrow Wilson Rich, but they soon changed it to Ruggiero Ricci as it seemed like a better name for a prodigy. His skills were impressive no matter what his age—or name. When he was 6, Ricci was taken by his father to audition for Louis Persinger, a prominent violin teacher who, at the time, was having great success with another young prodigy, Yehudi Menuhin. (Menuhin went on to study in a special theory program at the Institute of Musical Art, Juilliard’s predecessor institution, in 1925 and 1926; Persinger would be a member of the Juilliard faculty from 1930 until his death, in 1966.) Persinger took Ricci on as a pupil after a year and he was soon making an international splash; the boy made his recital debut in San Francisco in 1928 and his professional orchestral debut in London in 1932, performing the Mendelssohn Violin Concerto.

It wasn’t always easy being a prodigy. In 1930, after having assigned guardianship of young Ruggiero and his younger brother Giorgio (originally named George Washington Rich) to Persinger’s assistant a few years before, the parents sued to get it back in a scandal the world followed with rapt attention. (Persinger and his assistant had by that time relocated to New York so he could teach at Juilliard.) As the case was unfolding, New York City Mayor James Walker took the unusual step of refusing to sign a necessary permit an hour before a concert Ruggiero was scheduled to give at Carnegie Hall. (Walker thought it wasn’t appropriate for the concert to take place with the case going on.) The 1,500 people who had already paid were given their money back, and they and 500 more hopefuls were turned away. “The crowd showed disappointment but was orderly,” The New York Times reported the next day. Although Ricci’s parents were eventually granted custody, teacher and pupil remained extremely close—and for the rest of his life, Ricci himself did not have good things to say about the pushy parents he said were always found behind prodigies. His parents had required all seven of their children to play instruments from an early age; among Ricci’s survivors are his sister Emma, a retired violinist with the Metropolitan Opera Orchestra. He is also survived by his wife, Julia; four children from his two previous marriages, and several grandchildren.

In World War II, Ricci interrupted his concert career to serve in the Army Air Force as an entertainment specialist. A virtuoso, he uncovered many previously unknown 19th-century works and also specialized in the works of Paganini—he was the first violinist to record the composer’s fiendishly difficulty 24 caprices in their original version. But he played everything. In 1975, he filled in at the last minute for at a Hunter College recital and played Bach’s A Minor Sonata, the Bartok Sonata, and 12 of Paganini’s caprices, some of the hardest music in the repertoire, to rave reviews. In addition to Juilliard, Ricci taught at Indiana University, the University of Michigan, and the Mozarteum, in Salzburg, Austria.