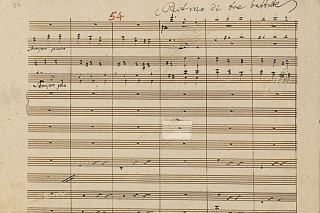 Juilliard's copyist manuscript of Beethoven’s Ninth Symphony and one that the British Library owns will be on display here starting September 30 and then at the Morgan Library. (Courtesy of the Juilliard Library)

As part of the Royal Philharmonic Society in London’s 2013 Bicentenary celebrations, Juilliard will host a historic exhibit of two copyist manuscripts of Beethoven’s Symphony No. 9 (“Choral”) from September 30 through October 4. This same exhibit will be move to the Morgan Library for public display from October 8 through December 1.

This manuscript of Beethoven’s Ninth Symphony and Juilliard's will be together for the first time since 1824. (Courtesy of the British Library)

Beethoven’s Symphony No. 9 is perhaps the most iconic work of the Western musical tradition, but many do not realize that it was commissioned by the Royal Philharmonic Society in 1817, with the final agreement signed in 1822. Although the R.P.S. had expected to present the world premiere of the Ninth, various factors—chief among them published entreaties from the Vienna musical community—led to the work’s historic premiere in Vienna’s Kärtnerthor Theater on May 7, 1824.

The R.P.S. score, which is now in the British Library, includes a dedication from Beethoven, “Geschrieben für die Philharmonische Gesellschaft in London,” and it was used by George Smart to conduct the first London performance of the work by the R.P.S. on March 21, 1825. This score will be exhibited alongside the Juilliard Manuscript Collection copyist manuscript, which was used both for the first performance in Vienna and as the basis for the first edition of the score published by Schott in 1826; it includes hundreds of annotations by the composer. (The autograph manuscript, which itself has a complicated history, resides in the Staatsbibliothek zur Berlin; published facsimile editions of the autograph are available in Juilliard’s Peter Jay Sharp Special Collections.)

In conjunction with this historic display, on October 1, Nicolas Bell, the curator of music manuscripts at the British Library, will present a Doctoral Forum called Beethoven’s Choral Symphony and the Philharmonic Society of London. And alumnus and faculty member Alan Gilbert and the New York Philharmonic will perform the symphony as well as a new work jointly commissioned by the R.P.S., BBC Radio 3, and the New York Philharmonic: Mark-Anthony Turnage’s Frieze, on October 3-5, 8, and 9. The New Juilliard Ensemble will present two additional R.P.S. commissions on September 29.