A plaque on the Mannheim, Germany, hospital where Samuel Adler was born declared that Mozart had once lived on the site. When Sam was born, his mother took a picture of the plaque and said, “our son will be a composer!” Recounting the story, Sam jokes, “so I couldn’t help but be a composer—it was predestined.” Predestination or not, he has composed more than 400 works over the course of his 70-year career and is still going strong. On October 28, there will be a special concert of his work—including a premiere—performed by alumni, faculty, students, and guests in honor of his 85th birthday. 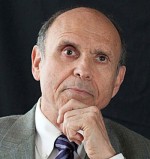 Sam lived with his family in Mannheim until he was 11, when they fled Germany and moved to Worcester, Mass. After receiving degrees from Boston University and Harvard, he served in the Army, where he formed the Seventh Army Symphony Orchestra, which General Dwight Eisenhower told him was the “greatest thing for American-German relations” since the end of the World War II. After returning to the U.S., Sam conducted the Dallas Lyric Theater and was on the composition faculty at the University of North Texas College of Music. He was on the Eastman School of Music faculty from 1966 to 1995, and he joined the Juilliard faculty in 1997.

When did you first know you wanted to be a musician?
I think I’ve wanted to be a musician all my life because my father [Hugo Chaim Adler] was a composer and my mother was a singer who sang to me in the crib. Ever since then writing songs was my big ambition, and I started doing it when I was very young. I have a sister who’s two and a half years younger and I would always make her sing my songs, and if she didn’t I would beat her up.

I started playing the violin at 7, and then I became a little more serious about writing because I saw what real composers were doing. When I was 15, during the war, I wrote a piece for the Worcester Philharmonic, where I was playing violin, called Epitaph for the Young American Soldier. My first masterpiece! Which I later realized wasn’t a masterpiece. A New York publisher called and wanted to publish that piece and anything I wrote after it. But I was too young to sign a contract, and my father refused to sign it for me. He said, wisely, I now see, “in five years, you’ll realize you never want to see these pieces again.” At 15, you feel it’s a masterpiece; at 16, you realize how bad it was.

Who was the teacher or mentor who most inspired you when you were growing up?
At first it was my father, who was a cantor who wrote prolifically, especially liturgical music. Much of his music is still sung today but without people realizing he wrote it—it’s just become “traditional.” Later it was Herbert Fromm, whom I studied with in high school. At Harvard, where I received my master’s, my heroes were my teachers: Paul Hindemith, Walter Piston, and Aaron Copland. In those days, all young composers wanted to write American music and sound like Copland and Piston.

What’s the most embarrassing moment of your career?
In 1973, I was asked to write an article for a music magazine on the future of American composition. I wrote that in 20 years or more, American music is going to be extremely complicated and very much in the tradition of 12-tone and other serial music. And of course I was completely wrong—it has become much more user friendly. It’s always embarrassing when people bring up that article—and they do bring it up, especially when I say that music today has become more audience-friendly.

If you could have your students visit any place, where would it be?
I teach a course in Berlin every summer for American composers, and the reason that it’s there is that in the summer, Berlin has more music than anywhere else in the world, and I want them to savor the atmosphere artistically and musically. There are so many museums—which they should visit—and there are three opera companies, seven orchestras, and three professional choirs with 100-plus singers performing during the time that we’re there. Several years ago, one of my students saw 19 operas in six weeks! That’s something you can’t get anyplace else in the world.

What are your nonmusic interests?
If I hadn’t become a musician, I would have wanted to become a historian—I love to read history and biography. And I also love to walk.

What are you reading?
From Dawn to Decadence by Jacques Barzun. It’s a great book.

What’s your least favorite thing?
The transportation from LaGuardia to Juilliard. I commute from Toledo, Ohio, every week—we’ve lived there since about 1995 because my wife, Emily Freeman Brown, is the director of orchestral studies at Bowling Green State University.

How did you decide to be a full-time composer? Or did you decide?
After the Army, I had to choose whether to be a full-time conductor—I had three offers to take over major symphony orchestras—or mainly become a composer. My father very wisely asked the question, how much composing did you do while you were conducting in the Army? And the answer was, not a note. So while I have always conducted and taught too, I chose composing.