Born in Jefferson City, Mo., and raised in Santa Barbara, Calif., Teresa McKinney earned her bachelor’s in flute performance at Hampton University and her master’s in arts administration from Florida State University College of Music. After grad school, she worked at Duke University’s Center for Documentary Studies coordinating a youth oral history project. Then she moved north to take what she describes as a “foot-in-the-door opportunity”—a development position with New York City Opera. After a few years, she became the company’s director of education, working there for a total of 11 years. Her work at City Opera—she designed and implemented opera education programs, produced operas for children, adult lecture series and public programs—“totally informs everything I do here,” Teresa said. (Click here for Juilliard community reactions, including Teresa’s, to City Opera’s recent bankruptcy.) 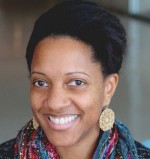 Teresa joined the Juilliard staff in 2011 and lives in Harlem. As the director of educational outreach, she handles a full portfolio that includes bringing approximately 1,000 New York City schoolchildren to Juilliard for performances throughout the year; overseeing the Music Advancement Program (MAP), which provides lessons and ensemble opportunities for 67 kids from backgrounds underrepresented in the American performing arts, plus a new summer program; and running the various outreach fellowship programs in which about 170 Juilliard students participate each year.

How did you end up doing what you do?
Everyone in my family played an instrument, and I started taking flute through an after-school program when I was in fourth grade, and piano in fifth grade. I played a lot at church, and in middle school I joined the school band. I majored in flute performance in college; my goal wasn’t very clear at the time, but I wanted to somehow work in social change and music. I did a lot of volunteering, so a seed was planted early on to do community-based work. When I got out of college, I did some performing, teaching, and working with young people and that’s when I grew to love the education side of the arts, so I eventually decided to study arts administration in education in grad school.

How do you balance your job and your artistic endeavors?
At this point my artistic endeavors are within the performing arts ministries at church: singing in the ensemble and writing for the drama team. I practice my flute every once in a while with friends for enjoyment.

If you could try out any job at Juilliard for a day, what would it be?
The president’s job. I’m curious about the daily issues he encounters with the many departments, students, and related cast of characters within the community.

What’s the craziest day at work you’ve had?
I don’t know if it was the craziest, but it was definitely the most difficult. One day at City Opera, we had 1,700 children at a piano dress rehearsal for Hansel and Gretel. During the part where Hansel and Gretel are lost, there was a production glitch, and the maestro had to stop for 30-plus minutes so they could fix the problem (since it was a piano dress, not an orchestra dress, there weren’t union rules about getting back to the rehearsal quickly). The children in the audience waited patiently for the story to finish—but then they had to leave before it did. That was a nightmare: we’d planned for a year for this to happen and they were very excited. But I did learn some valuable lessons, such as only bring kids to an orchestra dress rehearsal—not the piano dress.

What is the strangest job you’ve ever had?
I had to plan the funeral for my boss’s dog.

What was your best-ever vacation—and where would you most like to travel?
I did a house exchange in Paris for a month and thoroughly enjoyed pretending to be Parisian—eating great food, listening to the local music. And I’d most like to travel to West Africa to explore my ancestral roots.

If out of the blue your boss said to take the day off, what would you do?
Sleep in, eat something with syrup on it, and then head to the park with a book.

What are you reading?
The Twelve Tribes of Hattie by Ayana Mathis—it’s the story of an African-American family who migrated to the North during Jim Crow under very difficult circumstances.

Is there anything that people might be surprised to know about you?
I had severe stage fright as a child that often caused me to faint—I was extremely shy. Continuing in music performance helped me to work through that.

What’s one of your favorite Juilliard memories?
My favorite memory is also one of the earliest memories: the first MAP recital after I started my job. It had been a while since I’d seen young instrumentalists in recital and it took me back to a time when I was working with young people in music. I just loved seeing the effort and commitment that they put into it. And also seeing the proud parents. It was a joy and it still is.

What’s the hardest thing about marshaling several hundred fourth or fifth graders to attend a concert?
Wondering if the buses (and trains) are running on time and making sure the bus drivers let the kids off on the correct side of the busy street. Also late seating: we always want to seat the students as soon as they arrive so they don’t miss anything. Many travel long distances and we want them to enjoy every minute of the performance.

And the easiest thing?
Sitting alongside wide-eyed children and watching how much they enjoy listening to and learning about the music!