ChamberFest Encapsulates What Juilliard Can Offer 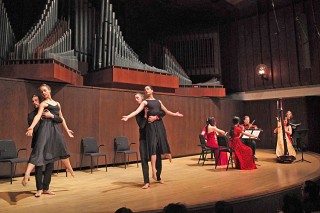 Each January, Juilliard musicians can form their own ensembles and program their own concerts through ChamberFest; the upcoming edition takes place January 13-18. Pictured: Last year at ChamberFest, a quintet of students and four dancers performed Andre Caplet’s Conte Fantastique.

A year ago in January, dancers joined a narrator, a string quartet, and a harpist to perform Andre Caplet’s Conte Fantastique. The 1924 work is based on Edgar Allan Poe’s story “The Masque of the Red Death,” in which the guests at a festive ball are overcome by a cursed plague called the Red Death. The music, choreography, staging, and wardrobe (musicians in red, dancers in black) were all decided upon by the students. The performance, a fabulous encapsulation of what Juilliard can offer—high-level performance, the ability to program and perform sometimes-obscure works, and interdisciplinary collaboration—was just one of the concerts in ChamberFest, the annual weeklong salute to chamber music that students put together at the end of winter break. This year’s edition opens on January 13 and includes eight concerts over the following five days, all of which follow a weeklong residency and coachings for the 100 musicians involved.

ChamberFest is an 11-year-old tradition that was the brainchild of Bärli Nugent (B.M. ’76, M.M. ’77, flute), the assistant dean and director of chamber music, and former associate dean Michael Finn (B.M. ’79, bassoon). “Students needed a place where they could delve deeply into the chamber music experience without distraction,” Nugent told The Journal. “The last week of winter break is an ideal time for that.” While students don’t have to pay board for the week they’re here, they don’t receive scholastic credit for it and it does mean sacrificing vacation time. As a result, Nugent said, the students who do end up signing on “tend to feel particularly passionate about it.”

And, in fact, participating in ChamberFest isn’t the same as playing chamber music during the rest of the school year, according to Emily Hoile, now a fourth-year who was the harpist for last year’s Conte Fantastique. “The main difference is the speed and intensity of the rehearsal process,” she told The Journal. At other times of the year, she added, “you might be working on one or two pieces over the course of a semester. In ChamberFest you rehearse them intensely for one week prior to the concert. This complete immersion can take you to a different place within the music, and it allows you to spend the time to discover details and nuances that might not have been found otherwise.”

Another reason that ChamberFest is a must-see, Hoile said, is “because there’s so much great music that the performers choose specifically because they love it. There’s such a variety of styles and ensembles all coming together at the same time, and at such a high standard.”

This year’s edition of ChamberFest will feature some new highlights. Two participants will be from outside Juilliard—a clarinetist and a violinist from São Paulo, Brazil, will take part in the residency and perform with a Juilliard pianist on opening night. (Their participation is in part as a result of a Juilliard Global Initiatives exchange last year.) And on January 17, a conductor will participate in the festival for the first time—second-year master’s student Christian Reif will lead Charles Wuorinen’s 20-minute New York Notes for violin, cello, flute, clarinet, piano, and percussion, coached by faculty member Jeffrey Milarsky (B.M. ’88, M.M. ’90, percussion) .