In September the New York Concerti Sinfonietta, of which Evening Division faculty member Julie Jordan (MM ’83, piano) is the founder and artistic director, performed with the winners of its Rocky Mountains Debuts program at Columbia University and at the Asian Cultural Center in New York City. Paul Hostetter (MM ’89, percussion) conducted. Jordan and Hostetter will also perform and teach with the Sinfonietta in China from December 27 through January 4.

In July, various members of the Juilliard community participated in the Perry-Mansfield Performing Arts School and Camp’s centennial. Faculty member Linda Kent (BS ’68) is the director of dance at the school, which is in Steamboat Springs, Colo. The performance featured a revival of Passings, which was choreographed by Robert Battle (BFA ’94) for the school nearly 10 years ago; it was performed by Kent and second-years Cleo Person and Kyle Weiler. The program also included a commissioned work by Antonio Brown (BFA ’07) called Breezes of Remembrance, work by Amy Hall Garner (BFA ’99), and an excerpt from Paul Taylor’s (BS ’53) Esplanade. In October, Kent was honored by Carson Brierly Giffin Dance Library as one of the 2013 Living Legends of Dance at the University of Denver. 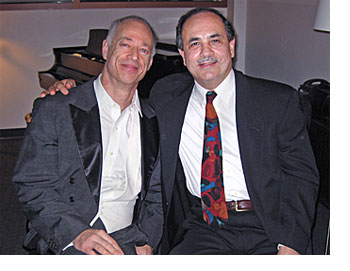 The Philadelphia Orchestra premiered a flute concerto it had commissioned from Behzad Ranjbaran (MM ’88, DMA ’92, composition; at right) in October. Yannick Nezet Seguin conducted and faculty member Jeffrey Khaner (BM ’80, flute; at left), the orchestra’s principal flutist, was the soloist. The concerto partly inspired by the sound and performance practices of Ney, the ancient Persian bamboo flute.

In November, drama faculty member Moni Yakim directed the U.S. premiere of And Give Us the Shadows, by Swedish playwright Lars Nolen, at the Schoolhouse Theater in Croton Falls, N.Y.

Jeffrey Cuyubamba, production designer for The Juilliard Journal, had several of his photos published in The Replacements: Waxed Up Hair and Painted Shoes—The Photographic History by Jim Walsh and Dennis Pernu, which was published by Voyageur Press in November.

Artist Diploma in Opera Studies candidate Julia Bullock will perform a recital of songs by Verdi, Wolf, Messiaen, Rossini, and others, including the premiere of a work by David Hertzberg (BM ’12, MM ’13, composition), on March 11 at Merkin Concert Hall. Renate Rohlfing (MM ’12, collaborative piano) will accompany her.

Playwriting student Branden Jacobs-Jenkins’s An Octoroon will be performed at the Soho Repertory Theater in New York in April.

In October, fourth-year cellist Julian Schwarz was the soloist with the Binghamton (N.Y.) Philharmonic Orchestra on Saint-Saëns’s First Cello Concerto.