(Photo by Baltimore Museum of Art)

It was quite a year. A few months before the premiere of Stravinsky’s Rite of Spring caused riots in Paris in May 1913, the Armory Show—formally known as the International Exhibition of Modern Arts—opened in New York City in February and shocked Americans who saw it. Perhaps the first blockbuster art show, this one created a critical and public storm that thrilled the organizers and artists—the art sold really well—and revolutionized the American art world. So nicknamed because it was held in the Lexington Avenue Armory, the Armory Show was organized by artists with an eye toward raising the profile of modern art, which it certainly did. A smaller version of it later traveled to Chicago, where it was seen by even more people (188,000 vs. New York’s 87,000), and Boston, where it was seen by 14,000. 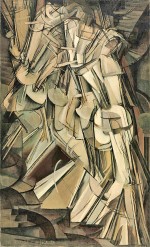 (Photo by Philadelphia Museum of Art)

To commemorate the exhibition’s 100th anniversary, the New-York Historical Society has reassembled about 100 of the 1,400 works from the original show for The Armory Show at 100: Modern Art and Revolution, which runs through February 23.

While The Rite of Spring still sounds fresh and new and it’s easy to understand its impact, to most of us today, the majority of artworks that were shown at the armory seem like familiar old friends. Some even seem extremely old-fashioned, and it’s hard for us to fathom what audiences found so outrageous in 1913. But in order to understand the shocking and revolutionary nature of the Armory Show, we need to step back and put ourselves into the mindset of Americans 100 years ago who had never experienced art like this before.

The Historical Society show begins with some very traditional looking landscapes, still-lifes, and portraits, some of which were influenced by French Impressionism. One sees numbers of soft, brushy meadows, forests, figures beside water, and snowy fields. Although these are very familiar to us, they were new to most Americans, the majority of whom had never traveled abroad. Others are depictions of gritty, street life by artists who were known derisively as the Ash Can School.

Robert Henri (1865-1929), leader of this “school” (technically called the Group of Eight), is represented by a few portraits. Again, to the modern viewer, these look quite traditional, but the idea of painting ordinary street people instead of gods, goddesses, allegories, or elegant models was revolutionary. Henri also painted one unabashed nude woman in 1913 expressly for the Armory Show, calling it Figure in Motion. Completely naturalistic, it differs considerably from the works that ended up being the most provocative ones in the show: Marcel Duchamp’s Nude Descending a Staircase and Matisse’s Blue Nude.

In 1912, John Sloan (1871-1951) painted McSorley’s Bar, which depicts a Greenwich Village landmark, and Sunday, Women Drying Their Hair, both of which he exhibited at the Armory and both of which can be seen at the Historical Society. One hundred years ago, most critics accepted Sloan’s paintings, but some considered them vulgar. Again, to modern eyes, they appear to be inoffensive, charming vignettes of New York City life.

The Armory Show also included the work of 19th- and early 20th-century European masters including Eugene Delacroix, Camille Corot, Edgar Degas, Auguste Renoir, Honoré Daumier, Paul Cezanne, and Vincent van Gogh. While the work of some of these artists hadn’t been seen much in the U.S., it proved less shocking than the new styles. One symbolist painter, Odilon Redon (1840-1916), hadn’t been very successful—and was largely misunderstood—in his native France. But at the Armory Show, where he had 76 paintings, drawings, and prints, he was praised by critics and he ended up being the exhibition’s best-selling artist.

It was the avant-garde Europeans who outraged the American public most, with Duchamp’s (1887-1965) Nude Descending a Staircase (1912) at the center of the storm. A New York Times critic described it as looking “like almost anything except a nude descending a staircase, and most—though not much—like an explosion in a shingle mill.” It quickly became the butt of more jokes, cartoons, poems, and tirades than any other work in the show. There were even contests to “find the nude.” One of the funniest cartoons was J. F. Griswold’s The Rude Descending a Staircase (Rush Hour at the Subway), which was published in The New York Evening Sun on March 20, 1913. Duchamp’s work, unbeknownst to most American viewers at the time, belonged to a whole genre of painting that included Italian Futurism, French Orphism, and Dadaism. Indeed, these artists’ whole raison d’être was to counter classical art’s traditional use of the nude. The robotlike figure in motion became pretty standard for many and pointed the way toward motion pictures. One smart collector, Frederick C. Torrey, purchased the Duchamp painting for $324. (Works bought at the Armory Show ended up becoming the core of several American collections, including the Museum of Modern Art’s and those of the Barnes and Frick collections.)

Henri Matisse’s (1869-1954) Blue Nude (1907) might have been the second-most provocative painting in the exhibit. Lent to the show by Gertrude and Leo Stein (the author and her brother, who were noted American avant-garde collectors living in Paris), the painting was shown in a room with other Fauvist paintings and sculpture by Constantin Brancusi (1876-1957). All of this work was controversial. (A hostile critic called the group fauves, French for wild beasts, in 1905 and the term caught on.) Viewers and the press ridiculed the bright, non-naturalistic use of color, and the distortions in the human body. Again, today these seem tame. But at the time, students of the conservative Art Institute of Chicago burned Matisse’s painting in effigy when the show traveled to Chicago. Cartoonist Robert W. Chanler drew a Parody of the Fauve Painters (1913) depicting a couple of monkeys painting human figures.

Of the five sculptures Brancusi sent to the Armory Show, his Mlle. Pogany, which is included in the current show, was most upsetting to viewers and the press; like Duchamp’s Nude, it was also ridiculed, with a New York Herald critic describing it as looking like “an underdeveloped and deformed infant.” Others compared the figure’s head to an egg. Many did not know what to make of it, though one astute critic, Charles H. Caffin, did seem to understand that the artist was stripping the piece of external meanings, and reaching the essence of sculpture, which in turn implied a kind of abstraction to which neither the American public nor critics were accustomed. But the Armory Show was soon to change all that. One of the organizers, artist Walt Kuhn, presciently wrote to his wife in 1912: “We will show New York something they never dreamed of.”