A Meeting of the 18th and 21st Centuries

Last summer, recent grad Brandon Labadie took part in faculty member Mari Kimura’s Future Music Lab program at the Atlantic Music Festival in which participants have a month to compose an original piece and perform it. Labadie, who had studied electronic composition as an undergrad, took on the seemingly incongruous task of using 21st-century technology to compose a work for 18th-century instruments: Les Folies D’Électronique, which you can hear a recording of at brandonlabadie.com/sounds. This article for the Alumni Center Stage: Technology issue is adapted from a piece he wrote about the experience. 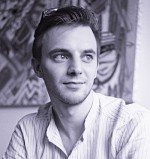 The creative process of taking a very well-known Baroque idiom (the folia) and transforming it into a modern piece while still holding true to the instruments, composers, and history behind the form forced me to do a lot of reflective research and explore various compositional outlets for this piece. Before my arrival at the Atlantic Music Festival, I had already decided that I wanted to write a folia, and began listening to various live performances by colleagues in the early music scene, as well as deeply analyzing the manuscripts available from composers, such as Marais, Corelli, Vivaldi, and a few anonymous musicians from the 15th and 16th centuries.

Limited by my hardware—two microphones, one laptop—as well as a two-week time frame, I quickly set out to compose 20 variations with a distinct palette of electronics. In my experience, attempting to force too many electronic sounds or effects into a composition causes a lack of development of said effects and results in a smattering of disjointed, poorly implemented electronic sounds. That said, the computer was an equal contributor to the composition; I used it to enhance harmonic texture, develop too-similar acoustic themes, and expand the audience’s preconceived notion of the sound space. I chose pitch shifting, ring modulation, delay lines, flanging, and a bit of source filtering as my colors for this project. Because of the predictability of introducing an effect and then developing it throughout the piece, I decided to begin simply with some sounds but allow others to take center stage immediately, regardless their proximity to the beginning or end of the piece. At times, I didn’t feel that any of the effects were necessarily enhancing the sound quality or affect of the variation, so I left those entities as standalone acoustic variations. I felt that provided the audience with an aural break from having to constantly process new sounds—and it also reminded them of the formal folia structure.

After speaking with faculty member Mari Kimura (B.A. ’85, D.M.A. ’93, violin), who’s also a performer, composer, and the director of the Future Music Lab program, I narrowed down my raw compositional choices to meter, harmony, and melody. Because the late folia has such a well-established chord progression—i-V-i-VII/III/VII-i-V,i-V-i-VII/III/VII-i-V-I, I chose to stay true to these harmonies throughout each variation. Giving myself permission to at times throw away any sense of rhythm or melody allowed a few beautiful (in my opinion) moments to occur in the piece, namely two improvised solos (a very Baroque tradition) and a few variations where the sense of meter decays over the 16-bar progression.

After the electronics and compositional aspects of the folia had been decided, I began to take a historical approach to the music. One of my favorite descriptions of the dance comes from the 15th-century writer Sebastián de Covarrubias (Tesoro de la lengua castellana), who notes the very noisy musicians carrying tambourines and other instruments, with other young men disguised as women slung over their shoulders. He also says the name means mad or empty-headed, which he deemed appropriate since the dance was so fast and noisy that the performers appeared insane. Later the dance developed into something more stately and a certain form was codified in the French and Italian music spheres, which also helped codify the distinctive form mentioned above. I decided to include a little bit of everything in my version, but also wanted to instill the sense of moving away from any preconceived historical notions, which I hoped to dismantle by using the electronics.

In the final week of preparation, I asked my colleague Baroque violinist Jae-Won Bang (M.M. ’13, historical performance) to rehearse bits and pieces of variations and record various extended techniques, so I could attempt to process them on my own. This experience really opened my eyes to how necessary it is to have the acoustic instrument in front of you with an expert behind the wheel; I found it increasingly difficult to conceptualize certain moments in the composition without having the instrument present to experiment with. During this period, I also discovered which interactive processing techniques worked best with each instrument. Chordal pitch-shifting on the Baroque oboe, for example, was much harder than on the violin due to the instrument’s spread overtones, “reedier” sound, and inconsistently veiled notes throughout its scale. I did not stop tweaking and fixing bugs up until the last minute of the performance. In fact, I wrote and programmed a new variation the morning of the concert, which Jae-Won and I rehearsed a few hours before the doors opened. Although the music festival world does not in any sense represent reality, this experience taught me that practice and reflection of the music has to be planned when doing a huge project like this, otherwise the performance aspect tends to suffer in the end.

Although the experience was very stress-filled and, at times, disheartening, I came out the other end with a great perspective on how I can use my skills as a performer-turned-programmer-turned-composer to further my instrument’s capabilities, as well as enhance my own enjoyment of music. Someone asked me after the performance, “What happens now? Where do you go after this, and how far can you take Baroque music or period instruments into this electronic world?” I didn’t have an immediate answer for him—and I think that answering that question has become what this is about for me. How far can I take the Baroque oboe (or any Baroque instrument, for that matter) into this new world of sound processing, and what new musical idioms will I discover along the way?

What is your outlook on recent lockouts, strikes, and bankruptcies in the performing arts world, and how do you they will shape the future of the arts?
Soundboard
Joseph Alessi
Faculty Portrait