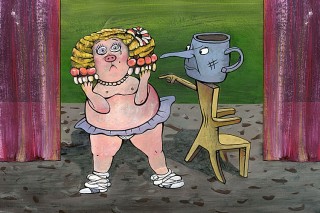 Doug Fitch, the designer and director of Gloria—A Pig-Tale, drew this picture of the conceited pig who gets her comeuppance.

New York audiences can look forward to an unconventional extension of the New York Philharmonic’s regular concert season as the orchestra and its creative partners unveil its new Biennial. With the theme Let’s Play, the 11-day festival (May 28-June 11) will explore a cross section of contemporary music (including several dozen premieres) in a variety of venues throughout the city. One of the highlights will be a fully staged production of H.K. Gruber’s vaudeville opera Gloria—A Pig Tale, featuring alumni of Juilliard’s Vocal Arts department and members of Juilliard’s Axiom ensemble, under the direction of the Philharmonic’s music director, Alan Gilbert (Pre-College ’85; MM ’94, orchestral conducting), who’s also Juilliard’s director of conducting and orchestral studies. For this outlandish work, Gilbert’s longtime collaborator Doug Fitch, who leads the production company Giants Are Small, will transform the Metropolitan Museum of Art’s Grace Rainey Rogers Auditorium into a pigsty and the singers into barnyard animals.

Gruber (b. Vienna, 1943) is a composer whose music consistently defies categorization. Trained in the techniques of 12-tone serialism, his music blends fierce dissonance with elements of jazz, cabaret, and popular song, and he is increasingly referred to as a founder of a so-called Third Viennese School. As Fitch said in a recent conversation with The Journal, his music “has a kind of post-Weimar-esque, vaudevillian, raucous, joyful, anarchic sound,” which will figure into Fitch’s production design.

Gruber first rose to international attention after the 1978 premiere of Frankenstein!!—a pan-demonium for chansonnier and orchestra, a work that Gilbert has championed in the past. “H.K. Gruber is an iconoclastic, crazy, fabulous composer,” Gilbert wrote in an email to The Journal. “When the Philharmonic performed his Frankenstein!! [in 2011] the performance coupled perfection with a magnificent irreverence, and I know this same excitement will happen again when the forces from Juilliard perform this wonderful opera Gloria.”

Gloria (1992-94) is based on a children’s book called Gloria von Jaxtberg by Rudolph Herfurtner. It’s the zany tale of a vain sow, Gloria, whose golden locks inspire a certain feeling of superiority in their owner and envy amongst her fellow pigs. Sure that her Prince Charming will rescue this pearl from amongst the other swine sooner rather than later, Gloria falls for the first fellow that shows an interest in her. Unfortunately, he turns out to be the butcher. Merriment ensues when a wild boar named Rodrigo rushes to her rescue.

Gilbert and Fitch have been friends for decades, having first met at Harvard, when Fitch was the drama tutor in Gilbert’s dorm. They most recently collaborated on the acclaimed productions of both Ligeti’s Le Grand Macabre—named best opera of 2010 by The New York Times—and Janáˆcek’s The Cunning Little Vixen, dubbed best classical event of 2011 by New York magazine. (In addition to designing productions for Gilbert, Fitch also designed his New York apartment.)

“Doug Fitch’s signature visual touch combined with his incredibly developed dramatic sense, along with his total, faithful, and sensitive commitment to music will be the perfect way to present Gloria,” Gilbert wrote.

Fitch is also excited to be working with his old friend. “Alan is always just great and will do basically anything I’ve ever asked,” he said. “He’s totally game.” Fitch has also had to be game as, midway through the creative process, he had already encountered a few surprises. Originally, he wanted to put the 13 members of Axiom in costume (there is no pit in the Met Museum’s auditorium, so they must be onstage), but found that the costume budget was big enough either to make the costumes or to pay the musicians the extra costume fee in their contracts to wear them. He also discovered that while the hay bales he wanted to spread across the stage cost only about $5 apiece, each costs over $50 to fireproof, so there will be fewer of them than originally planned. Flexibility is required for a person with his task, he admits, and he is certain the final production will come together well. “The Metropolitan Museum has been great,” he said. “They haven’t said no to anything”—including his request to put a pond onstage.

Among the nearly three dozen premieres that will take place as part of the Biennial are three by current, future, and former faculty members. Gilbert will conduct the Philharmonic in the world premiere of Symphony No. 4 by composition faculty member Christopher Rouse’s (June 5 and 7). On June 6, incoming composition faculty member Matthias Pintscher will conduct the New York premieres of his 2005 cello concerto, Reflections on Narcissus, which will be performed by B.C.J.E. alumna Alisa Weilerstein, and former faculty member Elliot Carter’s Instances. Another festival highlight will be the June 3 Contact concert of works by young American composers at SubCulture in the East Village. Among the works will be a newly commissioned piece for solo clarinet by Chris Kapica (B.M. ’08, M.M. ’09, composition).

Gilbert hopes the Biennial’s combination of unfamiliar repertoire and alternative music venues will prove to be an exciting and fruitful experiment. “Frankly, none of us know precisely what we’ll be hearing—that applies to the audience, of course, but also to the performers, at least before rehearsals begin,” he wrote. “Today’s composers work in a sea of sound, fed by currents informed by every influence and taste, rather than by working in adherence to or against codified schools of thought, as creators have be doing for centuries. I would like the audience to come in open to discovering how today’s composers have acted on the resulting freedom to identify their own compositional voices,” he added. “But really, I mainly want everyone to have fun.”