What's Going on These Days

A French documentary took the pulse of Juilliard over the course of the 2012-13 season. Raymond Pinto (B.F.A. '13, dance) is one of many Juilliard students depicted in A Season at the Juilliard School.

The three-city tour of Zelenka's Missa dei Patris is at the New England Conservatory on October 17, New Haven's St. Mary's Church on October 18, and the Sharp Theater on October 19. 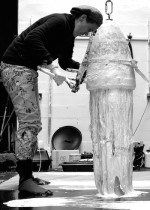 Juilliard's artist in residence, Fabienne Verdier, will be exploring the links between paitining and music in the act of creation while she is here.

Want to see how the world looks at us? During the 2012-13 school year, Arte France documentarians were embedded at Juilliard from convocation to commencement. They followed students in all divisions, trailing along to classes and lessons, filming rehearsals and performances, interviewing faculty, attending outreach sessions. The film, A Season at the Juilliard School, which is in German, English, and French, was aired in 10 countries this summer and can be purchased at sales.arte.tv. There aren’t any plans for a U.S. release at the moment, but producer and director Priscilla Pizzato is hopeful that situation will change.

Juilliard Jazz is looking backward—to its own roots and those of the genre—and forward this season under its new director Wynton Marsalis (’81, trumpet). Its new mission statement calls for developing “thoroughly educated musicians versed in the jazz continuum and its American vernacular roots” so that, via improvisation, swing, and the blues aesthetic, students can “realize their highest aspirations as people, artists, and citizens.” What that means in the concert hall will be on display in the Jazz Orchestra’s first concert of the school year, on October 14, when Bill Dobbins, a professor of jazz studies and contemporary media at the Eastman School of Music, will guest-conduct a program called Blues, Ballads, and Train Whistles.

In an unusual collaboration for Juilliard, French painter Fabienne Verdier will be in residence here for the fall semester in order to study links between painting and music in the act of creation. Verdier’s specialty is Chinese ink techniques; she studied ancient calligraphic arts with Chinese masters for many years. In recent years, she has drawn inspiration from the work of Flemish painters.

At Juilliard, Verdier will be working closely with music faculty member Philip Lasser (D.M.A. ’94, composition) as well as with chamber musicians, instrumentalists, vocalists, and composers to gain insights into the inner world of musical creation and possible links to the creative process in painting. Verdier will have a studio in the former Communications Office, on the second floor, where, she told The Journal, she “hopes to create a place where music and painting will share, learn, and grow together.” The prestigious Munich contemporary art museum Pinakothek Der Modern recently commissioned Verdier to create a series of paintings that will be called the Melody of Reality and be inspired by the research she will be doing while at Juilliard.

‘Alone we can do so little; together we can do so much.” These words, famously spoken by Helen Keller, ring true in all walks of life. No matter what path one takes, crucial people provide the support and even ideas to forge ahead. The music we perform today or will encounter in the future so often has its roots in teamwork, either through the cajoling of contemporaries or the generosity of benefactors.

Clarinetist Jeremy Eig, repertoire maven and distinguished member of the U.S. Navy Band, founded his Clarinet Commission Collective in 2009 as a means for clarinetists to share the expense of inviting important composers to write for the instrument. On October 25 in Paul Hall, Jon Klibonoff (M.M. ’82, D.M.A. ’88, piano) and I will present the world premiere of the Collective’s first effort: American composer Paul Schoenfield’s klezmer-infused Second Sonatina, a fresh, eclectic piece for clarinet and piano. We’ll also perform works by Reger and Miguel Yuste. —Alan Kay, Pre-College and clarinet faculty member and alum

South African keyboardist Kristian Bezuidenhout makes his Juilliard415 debut in two Mozart piano concertos (K. 271 in E-flat Major and K. 413 in F Major) on October 30. Also on the program are sinfonias by J. C. and W. F. Bach. This month Historical Performance will also continue its collaboration with Yale with a three-city tour of Zelenka’s Missa dei Patris. Juilliard415 and Yale’s Schola Cantorum will perform this rarely heard 1740 work under the baton of Masaaki Suzuki at the New England Conservatory (October 17), St. Mary’s Church in New Haven (October 18), and the Peter Jay Sharp Theater (October 19). Historical Performance director Robert Mealy notes that while this “spectacular, exuberant, and theatrical work was designed for the Dresden court musicians, one of the most virtuosic musical ensembles in Europe at the time, it was probably never performed in Zelenka’s lifetime, and after his death these works were never published until modern times. This performance is one of the few occasions this vivid and extravagant work has been brought to life.”

Listening to the 'Other'
Voice Box
Nods to the Past, in Song and on the Ivories
Discoveries