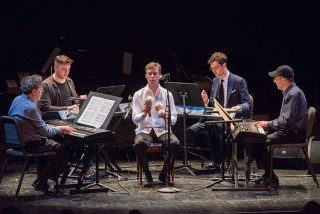 Two of the titans of 20th- and 21st-century composition famously met at Juilliard and performed together for a decade before a feud kept them apart for more than more than 40 years. In September, the two, Steve Reich (’61, composition) and Philip Glass (Diploma ’60, M.S. ’62, composition), performed together for the first time since the early 1970s. This 1961 recital has to have been among the earliest times their work was played on the same program—and they’re not the only all-stars who were on it. (Do you remember this concert? Let us know at journal@juilliard.edu or at (212) 799-5000, ext. 340.) The September reunion of the two took place over three days at the Brooklyn Academy of Music, where the 50th anniversary of Nonesuch Records was part of the BAM Next Wave Festival. Pictured performing Reich’s Four Organs with the two are some of today’s up-and-comers. From left: Glass, composer-pianist Nico Muhly (M.M. ’04, composition), percussionist David Cossin, composer-pianist Timo Andres (Pre-College ’03), and Reich. Though the venerable pair didn’t refer to the reunion on stage that first night, it was clearly an exciting moment. Muhly told The Wall Street Journal, “This feels like a piece of a weird childhood fantasy come to life.” And Glass told the paper in advance he thought it would be fun. “All my friends are dying off, and it’s so great to have a live one.” 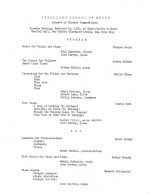 Thanks to Charlie Mathes (Group 27) and Matthew Greer (Group 24) who contacted us with an answer to the drama mystery photo in the May and September Journals. The actor with the helmet is Tom Story and the one in his arms is Christopher Johnson, who now goes by Christopher Jean. Both are members of Group 27, and the production appears to be the 1996-97 third-year production of Sophocles’ Philoctetes which was directed by Ian Belton in Room 301. Greer remembered, "That was a memorable production, as during the performance I saw, Kevin Daniels (Group 27; now on USA’s Sirens) had his microphone turned on at the wrong time. As was somewhat typical for Kevin, he was having a very inappropriate conversation whilst offstage, which was loudly broadcast during a very quiet and tender moment between Tom and Christopher onstage. I particularly remember faculty member Deborah Lapidus diving into the lap of whomever was sitting next to her in a fit of barely stifled laughter."