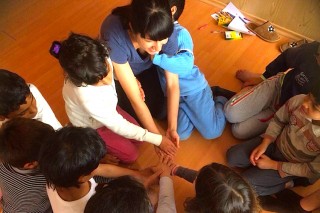 Just after graduation, violinist Charlotte Steiner and fellow alum Dima Dimitrova (pictured) headed to Bulgaria for a Summer Grant-funded experience that was both better and worse than could have been imagined.

Dima Dimitrova and I came up with the idea for the Ostinato Project during an orchestra trip to China that we were on during the 2012-13 school year. Dima was struck by the similarities she saw between her home country, Bulgaria, most notably the apathetic look we saw on the faces of citizens who have too few options in life. 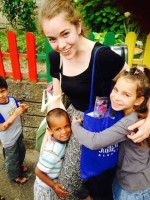 Taking the Arts Community to the Next Level
Teacher, Musician, and Leader in Macau
Artists Find Connections

This past year, largely inspired by the successful models of Juilliard’s Gluck Community Service Fellowship, ARTreach New Orleans Service Project, and the student-led Neojiba outreach program in Brazil, we created the Ostinato Project, which has two main goals. The first is to team-teach arts-based activities to children in orphanages who lack educational or recreational resources. The other involves working with conservatory students in Sofia to develop their own outreach program and pilot it at several hospices.

In June, thanks in part to a Juilliard Summer Grant, we spent three weeks traveling through Bulgaria, lugging giant suitcases filled with art and music supplies onto local buses that took us from orphanages in tiny rustic mountain villages to the National Academy of Music in Sofia. At each stop, were inspired to share what we do—play the violin and viola and teach—as a way to create hope that could be sustained long after we left the country.

Being a two-woman-team was much harder than anticipated; we were not only teachers and mentors, but stagehands, porters, navigators, surrogate older sisters, mediators, impromptu event planners, a donor relations team, supplies overseers, online fund-raising campaign managers, and of course, Dima coolly took on the huge burden of having to translate everything for me while I fumbled with a measly handful of phrases in Bulgarian (“Don’t touch that!” “Stop hitting!” “I already gave you gum!”).

Bulgaria, which was recently classified as Europe’s poorest nation, is home to thousands of children living in orphanages, though fewer than 2 percent of them are actually parentless and many see at least one parent fairly frequently despite having been removed from their homes or abandoned. The majority of children in institutions are of Roma (commonly referred to as the derogative “Gypsy”) descent, casting them further from the care and acceptance of their society.

We visited four orphanages and were shocked by the way many of the staff members treated and referred to the children at the first three. (At one, a social worker asked us, “Why would you even spend time here? These kids are hopeless.”) At those orphanages, we witnessed a broken system in which many of the people charged with caring for these children abuse them physically and verbally. Unfortunately, the children have sensed that they are not expected to succeed, and they imitate the negative language and behavior of the few adult role models they have. In many cases, the children spend most of their time stuck indoors, watching inappropriate television shows with no supervision. At some, we were the first volunteers to have visited. Yet the kids we worked with were talented, curious, and full of life even though they’re appallingly neglected and in desperate need of the sort of attention that would help any child reach his or her potential.

When we arrived at each orphanage, we didn’t know what to expect. Sometimes, we unpacked our instruments and bags of supplies in gloomy rooms where children who hadn’t been bathed in days would throw things at us. Our interactive performances were often presented to a difficult mix of teenagers who have been ignored by the system for far too long and children with special needs who were not receiving adequate support. That said, many of them sat attentively through each concert, requesting more Mozart or Hoffmeister when we ran out of things to play. They were delighted when we passed out the maracas, tambourines, and guiros, and we had them play along with us (in some cases, they preferred our classical music to local folk tunes!). Many picked up the rhythms and melodies and soon progressed from hitting each other to taking turns and sharing. Children who had once been shy and withdrawn were able to open up to others and express themselves through the activities we presented.

The children especially loved learning to play “Ode to Joy” on donated Hohner melodicas—we taught them using color-coded keys—and after practicing, they performed for each other. While I would be happy to never again hear Beethoven honked out on a melodica, it was worth it to see the children mature in their personal and musical skills as they learned new concepts and cooperated with one another.

The negative influence of the staff in these orphanages was unavoidable, however. One day  we had the children sit in a circle, pass a ball to each other and share their career dreams—teacher, policeman, chef, and even musician. One 10-year-old girl said she wanted to go to college and be a lawyer, and a staff member later said to her, “Why do you want to be a lawyer? So you can sue your mother since she can take care of you but abandoned you here?”

When we headed to our final orphanage, in the breathtaking Balkan mountains, we braced ourselves for another depressing institution, especially because this was a home for children with special needs and disabilities. To our delight, we were welcomed with hugs and songs by an extraordinarily happy group of children and teenagers. The difference between this orphanage and the others was extreme—here, no one was crying, no one was being hit, and everyone was treated with respect. This was thanks to one crucial person: the music therapist. Her enthusiasm  was tireless and her methods superb; she encouraged the children and teens to sing, play instruments, and dance, bolstering their self-confidence with her praise and their social and physical development with musical activities. After their welcome performance for us, the children excitedly asked us to perform and eagerly helped us set up our stands and take out our music without being asked.

Once we had played through our entire repertoire and passed out all the percussion instruments (with brilliantly perfect rhythm being kept by everyone in the room), the music therapist asked the kids if they wanted to take a break for a snack. “No, we want to make more music!” was the emphatic response. Dima remarked to me, “This must be the happiest place on earth,” and I had to agree. The inclusion of a music therapy program made this orphanage not just a place for children to survive, but truly a place for them to thrive.

Bringing a Bit of Relief

While we were at Juilliard, Dima and I had performed solo and chamber music at New York City healthcare facilities. She knew about the poor conditions in which Bulgarian hospice patients live and about the apathy among conservatory students there due to a lack of job opportunities. Based on our experiences, we were inspired to create a program that would benefit patients and conservatory students.

Since the concept of outreach performance was somewhat foreign to classical musicians in Bulgaria, we encountered some initial hesitance in getting our hospice-conservatory partnership started. After our introductory meeting, however, it was clear that the students were excited to try something new, and they brought fresh energy and ideas to the collaboration. We formed quartets together and played everything from Mozart quartets to Gershwin’s “Lullaby,” and Abba’s “Mamma Mia” to Frank Sinatra’s “New York, New York” at three Sofia hospices.

Two of our concerts had fantastic support from the hospice staff members, who were pleasantly surprised that musicians would want to spend their time playing for their oft-forgotten elderly patients. One concert, however, was more difficult and, frankly, closer to what we had expected. We waited outside with the students for half an hour because the staff had forgotten that our concert had been scheduled—and once we finally got inside, they informed us that all the patients were sleeping. So we began to perform in the hospice kitchen and were happy to see the staff enjoying our music. Eventually we made our way upstairs to individual rooms to play music for patients who were in very sad conditions. Hopefully our music brought a bit of relief to those who heard it.

One success of the conservatory part of the partnership was exposing the students to performing in an alternative setting, so they had to deal with music being blown off a stand by the wind or having to see patients who were visibly and audibly in pain. Still they all played their best and at our final concert, a cello student asked if he could play a solo for the audience, which was a highlight of the performance.

At our final hospice concert, our quartet for the day was performing an arrangement of Louis Armstrong’s “What a Wonderful World” with the rich harmonies and soulful melodies that only a string quartet can create. As we smiled at each other during each new line that needed to be brought out or sound that needed to be matched and patients who had hobbled out with canes and walkers nodded along, I was grateful to have the opportunity to connect across language and generational borders through such a simple but powerful song.

Although we witnessed a lot of heartbreak, we learned an incredible amount this summer and we very much want to continue our work in Bulgaria. We have plans to continue the partnership at two of the hospices with the help of the students who participated and are working on having student-organized performances in one hospice each month. We are looking for a way to fund the small stipend we provided the students for their time and hard work, and will keep brainstorming new ways for the program to grow. As for the orphanages, the neglect we witnessed is a multifaceted problem that won’t be solved in just one generation. However, we are determined to return to Bulgaria next summer to build upon the work we did, with a new goal of hiring the wonderful music therapist to hold workshops and train staff members at the other orphanages we visited. And of course, we can’t wait to return to make music again with the unforgettable children at all the orphanages.