From the Margins: Lee Krasner and Norman Lewis, 1945-1952 (through February 1 at the Jewish Museum), features two artists who seem completely unrelated at first glance, but who had a great deal in common: both painted in abstract, distinctive styles during the heyday of Abstract Expressionism; both resided in New York City and drew inspiration from their ethnic backgrounds; they were born just one year apart (Krasner in 1908, and Lewis in 1909); and both were funded by New Deal programs for artists. Krasner, who was Jewish and the daughter of Russian immigrants, grew up Brooklyn; Lewis, who was African-American and the son of immigrants from Bermuda, grew up in Harlem. 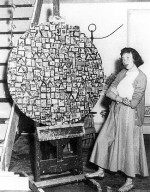 (Photo by The Pollock-Krasner Foundation)

Since Abstract Expressionists created large, aggressive, and powerful works of art and celebrated the virility of male painters, it is not surprising that some denigrated Lee Krasner, who was married to Jackson Pollock, as “the wife who also painted.” In fact, only relatively recently has she been taken seriously as an artist in her own right.

Norman Lewis drew inspiration from jazz, street life, and the Harlem Renaissance, but he did not adhere to stereotypes of a black artist, such as the expectation that he would depict oppression and poverty. After producing some representational works during the 1930s, Lewis turned to abstract painting, but while his mature works never overtly addressed racial issues, neither did they conform to Abstract Expressionism, the predominant art movement during the late 1940s and 1950s. Critics and curators, perhaps not knowing how to characterize his work, ignored him.

Lewis attended some meetings at the “Club,” a Greenwich Village studio where some of the Abstract Expressionists (though not Pollock or Krasner) congregated, but the members never really accepted him or treated him as one of them. Neither able to deal with issues of race nor to look past them, his contemporaries often acted as if he did not exist. Indeed, Lewis suffered from the kind of invisibility Ralph Ellison depicts in his novel Invisible Man, written from 1947 to 1952.

This show was inspired by a larger one at the Jewish Museum in 2008 called Action/Abstraction: Pollock, de Kooning, and American Art, 1940-76. According to The New York Times, the curator noticed that two of the paintings by Krasner and Lewis in that show “seemed to be speaking to each other”; this exhibition is the result of that observation. The introduction to this show’s catalog likens it to chamber music and contrasts it with the “symphonic” one that inspired it. In that exhibit, Krasner and Lewis’s works were in  a section called “Blind spots.” The catalog describes the relationship between the two artists’ works as counterpoint. Further, both Krasner and Lewis made use of themes and variations: the former in her Little Image series, and the latter in his Little Figure paintings. While Krasner’s series refers to calligraphy and her early study of Hebrew, Lewis’s are more music-oriented, and influenced by rhythms (and glimpses of human figures in his paintings) of jazz, Harlem street life, and African textiles.

The two paintings from the 2008 exhibition that inspired the present show were Krasner’s 18 x 39 inch Untitled (1948) and Lewis’s 23½ x 28 inch Twilight Sounds (1947). Both are modest and introspective compared to the brash, large paintings dominating the previous show. Krasner’s monochromatic painting uses irregular boxes to enclose what looks like an ancient script or secret code. One critic noted that Krasner worked from right to left, perhaps recollecting her childhood study of Hebrew; in her paintings, angular zigzags alternate with rectangles, diamonds, and hieroglyphs. Lewis’s painting, in contrast, employs spidery black lines punctuated by splashes of primary colors against a blue background. With only a little stretch of the imagination you can discern jazz musicians and crowds. These paintings show influences of avant-garde artists (for Krasner, early Mark Rothko and Mark Tobey; for Lewis, Joan Miró and Alexander Calder).

There is at least one other instance in which Krasner and Lewis’s works appear similar, in Krasner’s Untitled (1950), which makes use of rectangles and Lewis’s Untitled (1946), which uses straight lines and rectangles. Obviously, the artists looked to Mondrian for inspiration.

Neither of these innovators desired anything more than to paint in their individual ways. Neither could be pigeonholed. But because of their minority status and their resistance to categorization, they were often overlooked. Some of Krasner’s paintings resemble those of her husband, Jackson Pollock, with their skeins of poured paint. And some of Lewis’s are so subtle and mysterious that they require deep and meditative looking.

The show does not aim to demonstrate exact parallels but rather a synergy between the paintings of the two artists. This remarkable exhibition enlightens us about the spirit of the times, as well as how these artists differ.