In the September Journal, we published an obituary of Hyman Kleinman (faculty 1954-68), and quite a few alums sent us their reminiscences. Here are some excerpts. 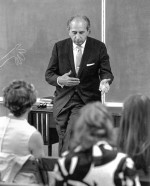 Hyman Kleinman in an undated photo.

(Photo by Courtesy of the Kleinman Family)

Robin Williams receiving the Alumnus of the Year award from then-Drama Division head Michael Langham in Los Angeles in 1991.

(Photo by Downtown Exposure, courtesy of the Juilliard Archives)

I was lucky enough to be in Mr. Kleinman’s literature class in 1958-59. Thanks to him I read Sophocles, Euripides, Socrates, Virgil, Homer, Roman novellas, the Bible, and medieval romances—and his enthusiasm for these wonderful classics was absolutely contagious. I went on to study at Barnard and U.C.L.A., but I never had another teacher in all my years of schooling to equal Hyman Kleinman. I have never forgotten him and have many times been grateful to him for sharing his love of great literature.

In the fall of 1963, I received a phone call from Leonard Bernstein asking me to play extra percussion with the New York Philharmonic. What I didn’t realize when I agreed was that the dress rehearsal was on the first day of classes at Juilliard. My brother Earl (B.S. and M.S. ’64, violin; current faculty) and I had the same class with Mr. Kleinman, and when I came home from the rehearsal, Earl said, “You’re in trouble!” He said Mr. Kleinman called the roll, and when Earl said I was rehearsing with the Philharmonic, Mr. Kleinman removed his glasses and slowly rose up from the table. He said, “That is not the way we start the school year,” and lectured the class about attendance.

For a couple months everything was fine, and then the Philharmonic again asked me to play extra percussion. I agreed—and saw that the dress rehearsal was going to be on a Thursday morning, so I quietly approached Mr. Kleinman and asked to be excused from class. He looked around the room and then whispered, “You can get the assignment from your brother.”

About six years later, while I was principal timpanist of the Philadelphia Orchestra, Earl (who was in the Juilliard String Quartet at the time) called me and said, “What did you have going with Mr. Kleinman?” I see him in the hall, and does he ask how I’m doing? No. The first thing he says is “How’s your brother?”

That meant a lot to me because even though I was not an “E” student in Mr. Kleinman’s class, he remembered me, and believe me, I have never forgotten him.

Hyman Kleinman was one of my most important teachers. I took two of his courses, and he always said that I was “the most literate percussionist” he had ever taught. Although thrilled at the time with this accolade, I wondered in later years whether there was a certain ironic praising with faint damnation. I wouldn’t have put it past him! Still, he seemed tickled to learn, when I caught up with him again in a two-hour telephone conversation in 2007, that I had a 35-year career as a high school English teacher—and I was amazed that in his mid-90s, he was still teaching.

A few snapshots: During a discussion of For Whom the Bell Tolls, I had ventured that the love affair between Robert Jordan and Maria was unrealistic because they had known each other for so short a time. “Love, Mr. Farber,” he said, “is not of time but of intensity.” I felt like an idiot. Nowadays teachers are not supposed to put down a student in so public a way, but the fact is I never forgot what he said nor its importance for life and literature.

I also remember coming to class on the day J.F.K. was assassinated. Mr. Kleinman broke down before he could say anything other than “I can’t teach today.” I figure it was the only time in his life that he said those words. Someone said “Thank you, Mr. Kleinman,” and we all filed out.

My sister, Karen Mésavage (B.S. ’61, piano), and I had the good fortune of having Mr. Kleinman for a world literature course. I remember very well our reading of Thomas Mann’s The Magic Mountain and the interesting discussions we had in class. Mr. Kleinman was very understanding of how antsy dancers were, and I remember that although he chastised me for embroidering in class, when I told him that it calmed me down and allowed me to listen to him more intently without fidgeting, he said it would be all right to continue. And so I continued to embroider, like Madame Defarge, but did not miss a word of the discussion. This is a very fond memory, and I can feel myself back in that classroom on the second or third floor of the old Juilliard building on Claremont Avenue, wearing that orange dance skirt. I am so glad that Mr. Kleinman had a long and fruitful life.

I went on to earn a Ph.D. from Yale in French literature and since 1981 have taught French at Rollins College, where I also founded the ballet section of the department of theater and dance.

Coming to Juilliard from a small town, I had not read much poetry. Mr. Kleinman’s thoughts about the metaphors in poetry—the use of words and their deeper and multiple meanings—were my introduction to the work I do now as a psychoanalyst—I listen to the music beneath what people tell me. He opened my ears and sensitivities to listening and hearing in a different way. Little could I know that I would blend my Juilliard and subsequent training to write about music as a pathway to emotion and the similarities between music and mind.

I also remember Mr. Kleinman’s keen dry wit and that twinkle in his eye, and I will never forget his compassion when my mother died and I had to miss school for about a month. In a letter expressing condolences, he added that he knew I was under a great deal of stress, and if I did not want to turn in any further work in his class I would automatically get a grade of B. I was so touched, yet I wanted to do the work we did in his class (not for a grade, but because I enjoyed it), so I did fulfill the remainder of assignments and got an A. It was not the grade that mattered, it was the kindness, the empathy, and the way he helped me think, feel, and grow up.

Mr. Kleinman, I’ve thought about you a lot since I graduated from Juilliard. Your memory will continue to be a lasting gift to me.

Between 1955 and 1959, I was privileged to take several humanities courses with Mr. Kleinman. I found him to be a wonderful teacher, and he recognized my interest in writing and encouraged me to become prolific in that area. He was truly enlightening with terrific insight and a fine sense of humor. I was in awe of his remarkable intelligence. It’s interesting that I can’t remember any of my other “academic” teachers at Juilliard, but all of my memories of Mr. Kleinman are very fresh and vivid.

Murray Grodner, who attended a Juilliard summer session program for high school students (briefly) in 1938 and Juilliard itself (also briefly) in 1941, saw the letter from Fred Fox (’35, French horn) [Playing Under Toscanini: An Alumnus Remembers,” September 2014] and our query about whether other readers had played under Toscanini.

Mr. Fox believed he might be the only surviving member of the New York Philharmonic under Arturo Toscanini. It might be of interest that I am probably one of the only surviving members of the NBC Symphony who played under Maestro Toscanini—I was a member of the double bass section from 1951 to 1954. Previous to that time, I was principal bassist in the Houston Symphony and before that, assistant principal in the Pittsburgh Symphony under an equally great conductor, Fritz Reiner.

I had a scholarship to Juilliard but attended only one day. I lived quite far out in Brooklyn and the travelling to and from Juilliard, plus the hours of classwork, left me with little practice time. My only interest at that age was spending as much time as I could studying double bass.

A number of Juilliard alums wrote to mourn Robin Williams (Group 6), who died in August. Here are a few excerpts of the reminiscences that were sent to The Journal and posted on a Facebook page that Alan Cox (B.M. ’77, M.M. ’78, flute) created and told us about.

In January of 1991 my father passed away. I was having a hard time with his loss and felt like I would never smile, let alone laugh, again. While I had always enjoyed going to the Juilliard reunions in Los Angeles, I wasn’t going to go to one that spring because I was too sad, but friends encouraged me to attend. This reunion dinner was honoring Robin Williams [who won the alumnus of the year award]. I had no idea what to expect, but he launched into a stream of comedy about the different departments of Juilliard that was so brilliant and hysterical, he had everyone in stitches. I am so glad I got to see him live and will always thank Robin Williams for helping me to smile and laugh again.

Do you remember how he used to do stand-up comedy in front of the vending machines in the Juilliard cafeteria? We musicians all thought he was absolutely nuts, but there he was—a budding genius.

I remember him walking the halls (of Juilliard) with a big mask on (drama students frequently did this exercise). He adopted a personality at hilariously opposite odds with what I’m sure he was supposed to channel from the mask.

We all thought [Robin] was wildly hilarious, streaking in the cafeteria, etc. etc. As luck would have it, one of my academic electives was drama. Robin was in the class, and that poor teacher lost control of the class every meeting. Robin had a great talent for being able to extemporize in iambic pentameter, so after a while, every reading of Shakespeare led to Robin’s whacked improvisations. The teacher avoided Shakespeare after a few tries and would often not let Robin read, but he would throw in little hilarious asides between the lines. R.I.P., dear Robin.