Making a Case for Performing His Music

Half a year after the tricentennial of Carl Philipp Emanuel Bach’s birth, Juilliard keyboardist Jiayan Sun muses on why we have neglected his music for so long—and why we should make the effort to revive it. 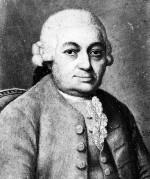 Carl Philipp Emanuel Bach (1714-88) was the second surviving son of one of the most famous composers ever (J.S. Bach) and was named after the most reputable composer of the day (Georg Philipp Telemann, who was his godfather). Mozart said of him, “He is the father; we are the kids.” Haydn, who studied C.P.E. Bach’s keyboard treatise and “Prussian” Sonatas in his formative years, mentioned how indebted he was to the younger Bach. Beethoven was fascinated by C.P.E.’s teachings and compositions and assigned his invaluable keyboard treatise, Essay on the True Art of Playing Keyboard Instruments, to his young pupil Carl Czerny at their initial meeting. So C.P.E. Bach was in the compositional pantheon of the 18th and early 19th centuries. But while his father’s music was re-evaluated and revived in the 19th century, C.P.E.’s legacy has progressively faded despite the occasional efforts of connoisseurs, among them Brahms and Schenker, to reinvigorate his masterful compositions by editing them. Why is that?

First let’s look at C.P.E. Bach’s legacy, which includes more than 300 keyboard works, among them more than 150 sonatas and numerous rondos and fantasias. He was innovative and frequently experimental, and he developed his style through acquaintance with all the compositional styles of the time. Even though he traveled as little as his father had, C.P.E. possessed profound knowledge of music through his early training with his father in Leipzig and his association with the great musicians of Frederick the Great’s court in Berlin. C.P.E. confessed in his autobiography that he “never liked excessive uniformity in composition and taste” and aimed for variety in compositions—an attitude Haydn and Beethoven would later adopt. Instead of settling on either end of the spectrum of music styles of the time—the German contrapuntal style exemplified by his father or the Italian galant style that his half-brother and pupil Johann Christian Bach subsequently embraced—C.P.E. cultivated the empfindsamer Stil (sensitive style), which expresses heightened sensitivity, personal and intimate storytelling, and sudden shifts of thoughts and expressions. He tried to recapture his legendary improvisations on the clavichord with “the wealth of his imagination, the profound sentiment of his heart, and his constant enthusiasm” (as seen in his idiosyncratic notation), music critic and composer Johann Friedrich Reichardt wrote in 1782. Influenced not only by his father but also possibly by Louis Couperin and Johann Froberger, C.P.E. Bach notated the improvisations preserved in the fantasias by indicating note values as precisely as possible while dispensing with bar lines. His other significant compositional experiments include a programmatic trio sonata called “Conversation Between a Cheerful Man and a Melancholy Man” and short keyboard character pieces that are musical portraits of his friends and acquaintances.

Even though the value of his keyboard treatise is recognized and the significance of his achievement in music history is secure, most of C.P.E. Bach’s compositions are underappreciated and rarely performed. The neglect of his music seems due to historical circumstances and present-day aesthetics. Undoubtedly, his music has fallen under the shadow of his father’s. Many of his works are unavailable in print or available only in corrupted editions. His highly personal and intimate style can be unsuitable for large concert halls and is an ineffective vehicle for keyboard virtuosos. Indeed, his style is sometimes dismissed as “bizarrerie” by today’s musicians, many of whom are unfamiliar with the quixotic qualities of his compositions as they feature sudden shifts of moods and sounds that can frustrate performers and disorient listeners.

In spite of these challenges, I think that we are at a most advantageous position to revive C.P.E. Bach’s music today. With convenient access to replicas of historical keyboard instruments and progressive awareness of historical practice through Bach’s theoretical and pedagogical writings, we are able to understand and interpret his musical language better. We are fortunate to be at Juilliard, where the fine Historical Performance program hosts a wonderful collection of historical keyboard instruments, including many harpsichords of different kinds, two types of fortepiano, and a replica of a five-octave unfretted Friederici clavichord. As Anton Rubinstein noted, “Every composer writes for the instrument of his time, and on our modern instruments much of this music sounds at a disadvantage.” But by diligently working with these instruments, we can gain firsthand experience of the broad sound palette that C.P.E. Bach so rigorously explored. We can also better understand and interpret the highly intimate and expressive characteristics of his music. As open-minded and daring musicians today, we are eager to explore these possibilities and play interchangeably on the different keyboard instruments that C.P.E. championed.

In addition, with the ongoing publication of the first complete critical edition of C.P.E. Bach’s works by the Packard Humanities Institute (it started in 2005 and is now about half done), we can finally delve into his compositional treasures easily. As performers today explore presenting public performances in intimate and unusual concert venues, we can appreciate the composer’s ingenuity and bizarrerie in appropriate settings. “Carlophilipemanuelbachomania,” a term invented by a contemporary, is not far from its realization in the hearts of today’s musicians and listeners.