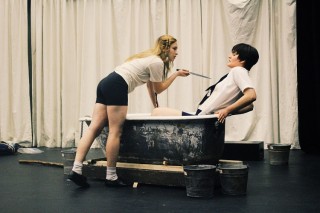 For the fourth-year rep adaptation of Macbeth, director Erica Schmidt pared down the tragedy to just four actresses playing multiple roles. Pictured: Kelsey Maverick, left, in the role of Macduff and Mary Chieffo, right, as Macbeth.

For the fourth-year rep adaptation of Macbeth, director Erica Schmidt pared down the tragedy to just four actresses playing multiple roles. Pictured: Kelsey Maverick, left, in the role of Macduff and Mary Chieffo, right, as Macbeth.

This all-female production of Macbeth (pictured: Kelsey Maverick and Mary Chieffo) is one of the three 2014 fourth-year repertory plays at Juilliard. The others are Metamorphoses and The Goat, or Who Is Sylvia?

Every year, the fourth-year actors come back one week early from winter vacation to start rehearsing three shows, which are produced using variations on a unified scenic design. These February performances mark the group’s last performance at Juilliard and a symbolic end to their training here. This year’s repertory includes Metamorphoses, an adaptation of Ovid’s stories by Mary Zimmerman; Shakespeare’s Macbeth, an adaptation for four women that was edited (and is directed) by Erica Schmidt; and Edward Albee’s The Goat, or Who Is Sylvia? The plays run from February 11 to 22.

Moni Yakim, a founding faculty member of Juilliard Drama, is directing Metamorphoses. The action takes place around water. But for design (among other) reasons, the McClelland Drama Theater can’t hold a giant pit of water, so Yakim has other plans to bring the play to life.

“It’s a playground,” Yakim said of Metamorphoses. “We’ll try to find out exactly where it’s going to take us.” The play tells 10 different stories, among them the love story of Pomona and Vertumnus and the quasi Oedipal tale of Cinyras and Myrrah. Yakim plans to treat each as a “playlet,” he told The Journal shortly before rehearsals began. “We’ll place it wherever it needs to be placed, and then give the actors the rope. It’s going to be a collaborative process. It’s very important that the actors come with thoughts, ideas, and ready to try things.”

Macbeth director Erica Schmidt also sees collaboration and openness as building blocks to a great production. “I love working at Juilliard because everybody’s always so game,” she told The Journal recently. Schmidt was last here in 2013, when she directed the fourth-year rep production of Topdog/Underdog by Suzan-Lori Parks.

For this adaptation, Schmidt pared down the tragedy’s sizable cast to four women playing multiple roles. “My concept is that they are schoolgirls who are passionate about telling the story of the play, but they’re not trying to play men.” And Schmidt is determined to redefine how the audience perceives this story of ambition, murder, and guilt. “For example, the line ‘We are yet but young in deed’ sounds so different when it comes from a young girl,” she said. “And I think, yes, we are but young in deed. You feel all the potential of that.”

Schmidt has high hopes for the impact that seeing the play with a compact cast will have on an audience. “There’s a resonance with the way we’re telling the story and the way it makes you start to think about witching and evil and ambition and peer pressure—and what the cultural responsibility for that is,” she said. “There’s a lot about imagination and fate and whether you think there’s free will or not. By having just four actors, there’s a cumulative effect that you don’t get in seeing a production where you don’t have to think about the mechanics of how it’s coming to be.”

The final play is Edward Albee’s Tony-winning The Goat, or Who is Sylvia?. Directed by Gaye Taylor Upchurch in her Juilliard debut, it’s the story of an affluent and seemingly normal family—epitomized by a pristine and fashion-forward set—torn apart by the father’s love of a farm animal.

One interesting challenge of the rep is that the set has to share certain core elements even though the three plays are very different. “Knowing that we weren’t going to be able to do a traditional four-walled set because of the rep was actually an exciting thing,” Upchurch told The Journal recently. “The main thing was constructing an environment in which, right off the bat, you realize how amazingly perfect everything is in this home. You want the fall from grace to be really far and hard.”

The set consists of a floor and wall that are white “because there’s something about that that feels very wealthy, beautiful, and pristine,” Upchurch said. “But in the takedown, when everything is smashed on the ground and the bloody goat is dragged in, the tragedy is palpable. And the fun and the tragedy of the destruction can really come out in sharp relief against a set that is simple and elegant.”

The Goat, Upchurch said, is “brilliantly constructed to be a modern-day tragedy in a way that I think we rarely experience. Albee has collapsed the space between a massive Greek tragedy and a contemporary living-room drama. There’s something about that that’s challenging and exciting and devastating—and it’s viciously funny.”