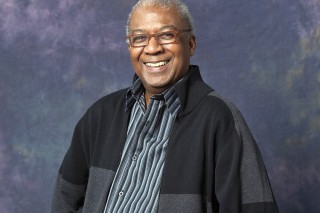 The following tribute is excerpted from a letter from the Drama Division administration to the division community and friends letting them know about the death of Kenneth H. Washington, 68, a longtime member of the Juilliard community and the director of company development at the Guthrie Theater in Minneapolis. He had been battling kidney disease, according to several newspaper reports. Born in Louisiana, he was educated at Talladega College, Syracuse University and the University of Utah, where he earned an M.F.A. and completed coursework on a doctorate.

A beloved member of the Juilliard Drama Division community, Kenneth Washington died at his home in Minneapolis on November 26. He had most recently been at Juilliard this fall, when he directed the third-year production of In Arabia We’d All Be Kings. He was also a relentless advocate for young artists throughout this country.

Ken first came to Juilliard during the 1991-92 school year as a project director, and for many years thereafter in that very important capacity was a pillar of the training. Working with the first- and second-year students, he was that rarest of things—a true teacher as well as a fine director. He brought his unique blend of incisiveness and kindness to such widely diverse projects as Six Characters in Search of an Author (1994), Blues for Mister Charlie (1998), The Crucible (2001), and The Grapes of Wrath (1995) and undertook with characteristic equanimity and skill such challenging projects as Marat/Sade (1992) and The Devils (1997). When he worked, his method was to ask questions rather than give answers. He was patient but always had the highest demand for the truth of the human experience on stage; in total he directed 11 plays at Juilliard.

Ken was a quiet force, never bringing attention to his efforts but rather focusing on how to nurture the growth of young artists, one at a time. For the past several decades, he generously dedicated his life to crossing this country searching for young passionate artists who had something to say and then doing all in his power to give them voice. From Juilliard and N.Y.U., where he had a home in the graduate acting program, and the Guthrie, where he helped create both a joint B.F.A. program with University of Minnesota and a summer training program, Ken guided young artists with a selfless generosity we all aspire to and modeled for us all the power of a life dedicated to the arts and its potential. He leaves behind a great legacy; his teaching lives on in a whole generation of students.

Before his return this fall, it had been a long time since Ken had been at Juilliard, though that wasn’t for want of trying. Just about every year we would ask, but Ken’s work at the Guthrie kept him busy. So we were very, very happy to have him back with us in September, and he had recently written to us about working on In Arabia, “It was a most refreshing and rewarding and fulfilling time for me (aside from all the things one wishes one had done differently, sooner, not at all, or otherwise!! ... always good though to keep one forever learning!).” We certainly were blessed to have him with us and see his beautiful work on that heartbreaking play.

If our lives are measured by those we touch, then Ken and his deeply rich life knew no bounds, for all of those touched by his gentle light will carry his legacy for years to come.