Even though Merce Cunningham’s Biped, which is part of this year’s Spring Dances Repertory, was not created with his longtime collaborator John Cage, the work, made seven years after the composer’s death, is very much “in the spirit of their collaboration,” according to dance faculty member Rachel Straus. “It employs the latest technology, layers—but does not join—music and dance, and concerns the nature of being in space and time.” 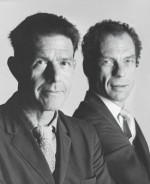 (Photo by Hans Wild; Courtesy of the John Cage Trust)

This is the first installment of an occasional series by Straus about famous choreographer-composer pairs and their collaborations—and this is one of the most unusual pairings. Cunningham believed that dance should develop on its own, without the influence of music, yet he called Cage his greatest influence.

“We are not, in these dances and music, saying something. We are simple-minded enough to think that if we are saying something, we would use words. We are rather doing something. The meaning of what we do is determined by each one who sees and hears it.”

“We don’t dance to music. It does not push us; we really have to do it ourselves.”

ASHEVILLE, N.C., 1952 Picture this: A lithe yet starkly serious Merce Cunningham dances down the aisle— followed by a dog—while, from atop a ladder, John Cage repeats a lecture he'd recently given at Juilliard. "One has to put a stop," Cage exhorts, "to studying music. That is to say, one has to stop all the thinking that separates music from living." Meanwhile, a student named Robert Rauschenberg plays warped records on an old phonograph. His white paintings hang from the ceiling. The paintings double as screens for Nicholas Cernovitch's projected images. The poets M.C. Richard and Charles Olson alternate reading from atop another ladder. The audience members hold empty coffee cups rather than programs. Some use them as ashtrays. When Cage finishes his Juilliard speech at the 45-minute mark of the program, someone goes around and fills the cups with coffee—and then the happening is over. Audience members laugh. Their cigarette butts are floating in java.

And with the last giggle, the first "happening" at Black Mountain College ends. The playful event could have been a historical blip, yet for John Cage (1912-92) and Merce Cunningham (1919-2009), it held the keys to their future collaborations. While the happening—"mixed- media, multidisciplinary, anti-establishment," according to Cage scholar Leta Miller—appeared impromptu and random, it was anything but. Each performer acted alone but knew he had to stop after 45 minutes.

Cage and Cunningham collaborated as noncollaborators, turning away from narrative, emotion, and programmatic structuring, on more than 50 works. "They broke the umbilical cord between music and dance, affirming their independent existences," wrote theater scholar Gerald Rabkin in 1984. A year earlier, Cage told the music journal Sonus "I'm on the side of keeping things mysterious, and I have never enjoyed understanding things."

What was exceedingly marvelous about Cage and Cunningham's artistic relationship, period of domestic partnership, and lifelong friendship was their fearless embrace of change. What allowed them to collaborate in this terrifyingly open-ended manner was their agreement that their work would be united by time and space—that is, by an agreed-upon duration and venue, and their respect for each other's investigations—no matter how experimental.

After a rather lonesome experience with serial studies under Arnold Schoenberg, Cage had begun his collaborations with dance in 1938 at Seattle's Cornish College, where he met Cunningham. In 1944, after the two shared their first concert in New York City, Cage began contributing to Cunningham's visibility through writing (and also by driving the dance company station wagon on tour and making lunch for the dancers).

While Cage's setting of parameters for musicians to improvise within his scores continued throughout his life, Cunningham dispensed early on with improvisation. While Cunningham's work became increasingly formal, rigorous, and balletic, Cage embraced anarchy theory. And while Cage was an integrationist, blurring boundaries between life and art, there was, and is, nothing natural about dancing Cunningham's highly wrought style. It's like tightrope-walking in roller skates.

Since the deaths of Cage and Cunningham, scholars have been considering how their artistic collaborations developed—and how they diverged philosophically. In the 1960s, when audience members left Cunningham-Cage performances in droves, a New York Times critic suggested that Cunningham's work would be more digestible if he stopped collaborating with Cage. In response, a Village Voice critic wrote that Cunningham without Cage would be like the Bible without God. Though the allusion is funny, it's not entirely apt. Cage and Cunningham's avant-garde collaborations offered audiences the opportunity to reflect on aspects of being—such as seeing, hearing, and thinking—in events that didn't feel sanctimonious let alone religious. Beneath Cage's technology-driven music and Cunningham's exacting dance, the playful spirit of Black Mountain still lurks. It brings to mind that first happening, when a dog followed Cunningham down the aisle. Dogs have a good nose for adventure. Some people have it too. Those who gladly followed Cage and Cunningham were treated to a five-decade journey that changed the course of music and dance history.