The Latest From Faculty, Staff, and Students March 2015 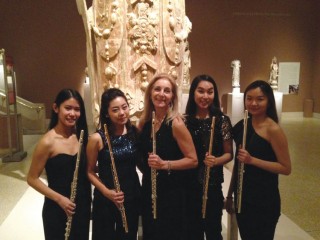 Faculty member Carol Wincenc and some of her flute students at the Metropolitan Museum of Art.

This summer, dance faculty member Milton Myers will teach at the School at Jacob's Pillow, in Becket, Mass.

Historical Performance faculty member Robert Nairn has been named a distinguished professor of music at Penn State, where he teaches and coaches as well as directing the Penn State Baroque Ensemble.

In October, Natalia Cwik, an adviser in the Office of International Advisement, gave a presentation at a conference of NAFSA, the National Association of Foreign Student Advisers. Her presentation showed how Juilliard helps international students integrate more smoothly into U.S. culture.

In October, double bassist Douglas Aliano (Pre-College '12), violinists Simon Michal and William Shaub, and alums Matthew Cohen (BM '09, viola) and Charlie Rosmarin (BM '14, percussion) were among 10 instrumentalists selected from the Music Academy of the West by the New York Philharmonic to be Zarin Mehta Fellows. As such they participated in 10 days of coaching, chamber music, and other professional development activities with Alan Gilbert (Pre-College '85; MM '94, orchestral conducting), the director of conducting and orchestral studies, and Philharmonic musicians.

Dontrell, Who Kissed the Sea, written by Playwrights fellow Nathan Alan Davis, had its world premiere in February at the Skylight Theater in Los Angeles; it runs through March 29. Tony Abatemarco (Group 7) is the co-artistic director and Gregory Wallace directed.

In February, doctoral candidate Khari Joyner (BM and MM '13, cello) performed the world premiere of Carman Moore's (BM '66, composition) Madiba with the American Composers Orchestra at Carnegie Hall's Zankel Hall. The work was commissioned by the A.C.O. and inspired by the life of Nelson Mandela. The program also included three pieces that were orchestrated by Molly Joyce (BM '14, composition).