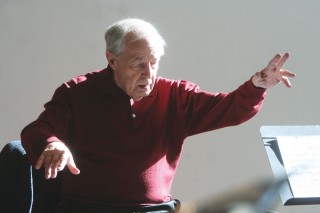 Pierre Boulez rehearsing at Juilliard in 2008 for the Focus! festival.

A lone oboe plays a plaintive melody, punctuated by the steady, somber beat of drums. The sounds come not from the stage, but from above and perhaps behind. Slowly, other groups enter, surrounding the listener from various settings throughout the hall, marked by drums and pealing bell-like sounds. One is immediately put in mind of a ceremony, a ritual being played out, one that sounds both timeless and immediately contemporary.

David Robertson, shown here conducting the Juilliard Orchestra in 2009, returns to lead the ensemble's tribute to Boulez on April 19.

This is the experience of Pierre Boulez’s moving orchestral work Rituel in memoriam Bruno Maderna (1974-75), which David Robertson conducts as the culmination of a Juilliard Orchestra concert at Avery Fisher Hall on April 19, in celebration of Boulez’s 90th birthday, a few weeks earlier. The program pays homage to a formidable composer and conductor who has been a dominant figure in contemporary classical music life for more than 60 years. For Robertson, the tribute is a particularly personal one, as Boulez has been mentor, hero, and friend to the American conductor throughout his career.

The program brings together a subtly intertwined combination of works central to Boulez. Debussy’s epochal Prelude to the Afternoon of a Faun (1894) served as a crucial precuror to 20th-century music and has long been central to Boulez’s repertoire as conductor.

Stravinsky’s Symphonies of Wind Instruments (1947), the second piece on the program, was written in memoriam to Debussy. Fittingly, Boulez’s Originel from “… explosante/fixe …” derives from a work written in memory of Stravinsky himself. And finally, Rituel, which Boulez once called “a ceremony of memory,” is dedicated to the memory of the Italian composer and conductor Bruno Maderna.

Even the setting of the orchestra’s concert—Avery Fisher Hall (once known as Philharmonic Hall) is altogether appropriate as it resonates with a crucially important and turbulent chapter in New York musical life—Boulez’s tenure as music director of the New York Philharmonic, from 1971 to 1977. Boulez introduced many innovations to the orchestra, greatly expanding its repertoire both in contemporary music and, surprisingly, in carefully planned explorations of such historical composers as Haydn, Scriabin, and Liszt. Boulez was also among the first to take the orchestra out of its most traditional settings, most famously with the now-legendary Rug Concerts, which ran as a casual series of summer concerts from 1972 to 1977—the audience seats at the orchestra level were taken out, the resulting seating was casual, the contact with the orchestra more informal and immediate, the repertoire adventurously juxtaposed new and old in unexpected ways. These innovations—the fearless willingness to rethink what an orchestra can be and do—prompted stiff resistance at the time from traditionbound subscribers and, unhappily, from some quarters of the press. But musical life has long caught up with many of these once-radical innovations; Boulez was, characteristically, well ahead of his time.

Happily, Boulez himself has been a welcome guest at Juilliard across the decades. During his New York Philharmonic tenure, he led a number of Informal Encounters concerts at the Juilliard Theater (now the Peter Jay Sharp Theater) focusing on such composers as Berg (excerpts from Wozzeck with Christa Ludwig), Schoenberg, and former faculty member Elliott Carter (Concerto for Orchestra). The long friendship between Carter and Boulez inspired the latter’s most recent visit, when Boulez conducted a program at Juilliard celebrating the centennial of Carter’s birthday at a Focus! festival concert in 2008, with Carter in attendance.

And so, when David Robertson leads a new generation of Juilliard musicians in homage to Boulez, there will be many layers of celebration—of close friendship between two musicians of different generations, a fitting recollection of an important chapter of New York’s musical history, and, most important, a milestone birthday in the life and work of one of the most fearless, inventive, and innovative musicians of our time.

In an interview with The Journal in 2008, Boulez articulated what might serve as a lifelong artistic credo. “Be always not satisfied with what you have done, even if what you have done is satisfying. But just to go further—for me, that is absolutely essential.”

Boulez and Robertson on Rituel

From an interview with Pierre Boulez and David Robertson by Jean-Pierre Derrien, Paris, November 9, 2002.

Boulez: Rituel is written in a particular way: seven percussionists [ed: those spread out around the hall], out of the total of nine required by the score, each act as conductor... Since each of the groups is distant from the others, and has its own very different tempo, they cannot coincide. It was my conducting experience that led me to this solution: this is a work where the independent groups receive their initial impulse from the conductor, but once they’ve been given their entries, each group is under the leadership of its percussionist.

Robertson: Every time I’ve conducted it, the most important thing I’ve explained to the percussionists is that, like Henry David Thoreau’s famous percussionist [in Walden], they needed to move at their own rhythm.… That produced a kind of perpetually changing ‘rhythmic tempo.’ That’s why a layout with the orchestra spread out over a vast space, with the audience in the center, gives the score its full meaning. … It’s up to the conductor to react to what the musicians offer him and in that respect Rituel is a fascinating piece because everything is written but everything is different each time.