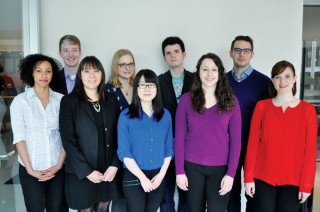 Some of the staff members who had started during this school year gathered for a group portrait. Back row, from left: Shawn Kelly, Jessica Liese, Dylan Amick, and Daniel James. Front row, from left: Jamie Tuss, Rachel Christensen, Zhaodong Zheng, Jaclyn Birkner, and Denise Crawfort.

The following people have joined the Juilliard staff during the course of the school year.

Anika Adilifu is the coordinator for Jazz Studies. She is a performing arts advocate, New York City native, and graduate of Oberlin College. Anika began her career working for George Wein’s Festival Productions and developed her experience in performing arts management and production at Opus 3 Artists. She has since worked as an artist manager and production administrator for diverse arts organizations including Maija Garcia’s Organic Magnetics and Francesca Harper’s, the Francesca Harper Project.

Dylan Amick is the new staff electrician in the Production Department.

Chih-Yu Chiang, the coordinator for Academic Affairs, comes to Juilliard from Columbia University’s School of International and Public Affairs, where she served as executive assistant to the dean. Chih-Yu holds a B.F.A. from Taipei National University of the Arts in Taiwan, an M.M. in piano performance from the Manhattan School of Music, and an M.A. in higher and postsecondary education from Columbia’s Teachers College. She is very pleased to return to Juilliard; early in her career she held a temporary position in the Admissions Office.

Rachel Christensen has joined the Alan D. Marks Center for Career Services and Entrepreneurship as an administrative associate. Originally from Salt Lake City, she has a bachelor’s degree in classical piano performance from New York University, where she studied with Miyoko Nakaya Lotto (B.M. ’71, M.S. ’73, piano). Prior to Juilliard, Rachel worked as a booking associate at Concert Artists Guild and also for Make Music New York, IMG Artists, and the Nouveau Classical Project. She still performs occasionally in New York.

Denise Crawfort, the new executive assistant to the president, has joined the staff after four years working in real estate development. She is a graduate of Ithaca College and the University of North Carolina Greensboro with degrees in voice performance and music education. While teaching in Connecticut, Denise helped found and run Hartford Opera Theater, a young opera company producing yearly productions and a new-music weekend. Since that time she has continued to perform locally and is excited to be back working in arts administration.

Jenna Fikes is the new office manager/administrative assistant for Finance and Administration.

Daniel James (B.M. ’12, M.M. ’14, flute) is the artistic coordinator of digital content for Juilliard Global Ventures. He grew up in Wisconsin, and from 2008 to 2010, he lived in Italy, where he played in Orchestra Mozart under Claudio Abbado and was a member of the Teatro alla Fenice Opera House Orchestra in Venice. He has also worked on the staffs of the Metropolitan and Santa Fe operas. When he’s not at Juilliard, he’s likely to be around town looking for what’s new in the arts.

Osman Kabir is working in Information Technology as a programmer and analyst for SharePoint/.NET.

Jessica Liese came to Juilliard as digital content manager in the Publications Department after a decade in the publishing industry, most recently as a project manager working with online reference databases and e-publishing at Facts on File. A native of Havre, Mont., she holds a B.A. in history and music from Mount Holyoke College, where she played in the orchestra (percussion) and jazz ensemble (piano). In her spare time, she co-hosts a popular podcast dedicated to reality TV and contributes pop-culture commentary to a handful of websites.

Claire Raphaelson, the new administrative assistant in the Historical Performance program, earned her bachelor’s degree in voice and music history from the Music Conservatory of Chicago College of Performing Arts and her master’s in historical performance from the Longy School of Music. A native of New York (and a graduate of neighboring LaGuardia High School for the performing Arts), Claire is an active early music singer, an aspiring fitness instructor, and a messy but excellent cook.

Joel Turnham joins the Production Department as master electrician for the Willson Theater. Originally from Maryland, Joel received a B.F.A. in lighting design from Boston University and worked as an electrician and designer in the Boston area for several regional theater, opera, and ballet companies. Since moving to New York 18 months ago, he has been working primarily with the Public Theater including being on the staff for last summer’s Shakespeare in the Park productions and this winter’s Hamilton. An avid home brewer, Joel enjoys cooking, reading, and video games.

Jamie Tuss has joined the Office of Admissions as the administrative assistant, having previously been a temporary staff member. She’s from Dayton, Ohio, and graduated from Wayne State University with a B.F.A. in stage management and first came to Juilliard as part of the Professional Internship Program. She lives in Harlem, belongs to a weekly bowling league, and takes road trips whenever she can.

Zhaodong Zheng has joined the Information Technology Department as the web development specialist. Prior to Juilliard, she worked as a front-end/UX designer at GoEnnounce. She holds a master’s degree from Columbia University and will receive her master’s in education in instructional technology and media from Teachers College this month.