The Drama Division and theater community lost one of their brightest lights on March 23 when Robert Neff Williams, who taught at Juilliard from 1970 to 2011, died at age 94. Williams had also been in charge of the speech division at Columbia University for many years, served as a speech consultant for Hallmark Hall of Fame television productions, received the Folger Shakespeare Library Theater Fellowship, and worked at the Pearl Theater for many seasons. His credits include Broadway, Off Broadway, and regional theater. Kate Wilson reminisced about this revered colleague and asked some of her fellow Juilliard faculty members to do so as well. Click here to see a video made about Neff Williams and Juilliard in 2012. 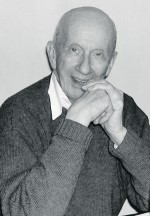 Honoring an Icon of the Theater World

Robert started each class with the command “jump!” It was a launch into his vocal warm-up and a prompt to be courageous in the work. From the laconic zingers he slung in faculty meetings to the bon mots he wrote on his annual holiday boxes of LiLac chocolates, Robert was a wondrous wordsmith. I had the privilege to bask in his brilliance from my year as an apprentice to his final class. He will live forever in the Juilliard classrooms, which echo with such Neff-isms as:

Robert was an extraordinary man and a wonderful teacher whose dazzling array of exercises galvanized lazy lips and tongues into clarity and precision. His particular talent was infusing dull voices with dynamics and extending their range. He swept aside obstacles. When I nervously suggested that I couldn’t teach Eastern Standard speech, he replied “Nonsense! Of course you can.” He was devoted to the theater and saw everything on Broadway, Off Broadway, and Off Off Broadway. His desire to inspire his students with a similar passion led him to create a notice board on which he pinned articles, interviews, and reviews. It’s still in use—a potent reminder of his presence. I count it a real privilege to have worked closely with him for so many years.

Robert’s teaching didn’t follow a method, he didn’t develop a method, and he hasn’t spawned a method. He just did the work, brilliantly, consistently, and indelibly. He was all about the actor, not about himself. His exercises in traveling stress (“one two three four five”), parenthetical thoughts (“Evangeline, stop chattering!”), precision of consonants, vocal variety and daredevilry, and rhetorical skills are core elements in the art of hundreds of actors.

In my years at Juilliard, the voice and speech faculty (Robert, Edith Skinner, and Elizabeth Smith) was great and formidable. It was an invaluable lesson to me, a new teacher, that such top-level and highly individualistic master teachers and personalities could also be so cooperative, supportive, and nonproprietary with no compromise of their standards. A true man of the theater, Robert made general comments to actors that were succinct and right on. “Take off the gardening gloves.” “Your Edmund was fine, but he wasn’t dangerous enough.” “It needs balls.” Over the years, I have encountered many Juilliard actors, including the late great Robin Williams, who say he was their single greatest teacher, one whose work lives with them every time they step onto a stage or in front of a camera. He was unique, unforgettable, and irreplaceable.

Robert was the embodiment of elegance and practical knowledge. I would visit his class and say “I’ve come to learn something.” And he would say “You’ll be bored.” I never was! I was in awe of his ability to stay current with new theater. I miss his coat and tie in a world of sweatpants, and his pithy remarks summing up the students’ progress. I miss seeing his hands on an actor’s shoulders to encourage low and full breathing. I miss his playfulness with melody in storytelling, his signature exercises in range, his passion for chocolate, and his beautiful thank-you notes. There are so many things we must continue to bring to the students that he offered them. While he was here, I could say “I need a little more Robert Neff” and the actor’s performance would improve in the moment. I am grateful and humbled that I worked with him.

I had the great privilege of knowing Robert Neff Williams as my teacher, mentor, colleague, and office mate. In all of those contexts, I learned many of the same lessons from him: embrace precision; eschew verbosity; maintain a clear and direct relationship with students and colleagues; focus on the work; cut to the chase; and never abandon your sense of humor. Always meticulously attired in coat and tie, he taught those lessons as much by example as through instruction. A man of rigorously high standards and encyclopedic knowledge, his passion for the theater was infectious and it lives on in all of us who were fortunate enough to have known him.

I only have two regrets: not having seen Michael Jordan play basketball live and not having studied with Robert Neff Williams. I am, however, forever grateful that he asked me to teach at Juilliard. At first his tweed-clad self was intimidating, yet finding out he was from South Dakota made him seem more approachable. He was a sartorial model: always elegant, but most of all, fun. Bantering with him over the evolution of powerful and beautiful speech for the theater made me investigate my own work with more depth. His breadth of theater knowledge was bigger than most of us can imagine, and he set a high bar for learning how to be a complete artist.