An Immense And Wonderful Responsibility 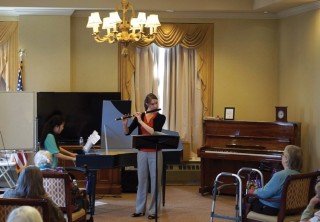 Melody Nishinaga and Melanie Williams gave a series of concerts as part of their Gluck Community Service Fellowship, including one at a retirement community in Forest Hills.

This past year, music brought me to playrooms where young children had tubes in their bodies and no hair on their heads, youth centers with teenagers from broken homes, hospital rooms where the terminally ill lay in their beds surrounded by family members, and Alzheimer’s care centers where an iPod played oldies and whiteboards were used to help residents remember happy times. 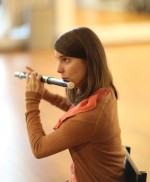 With Melanie Williams (MM ’15, historical performance), I was fortunate to be a recipient of the Gluck Community Service Fellowship, made possible by the Maxwell H. Gluck Foundation, and brought to reality by Yisset Gomez of the Office of Educational Outreach at Juilliard. Through this fellowship, many Juilliard students bring the arts to people at community centers and health-care facilities throughout New York, many of whom are not otherwise able to travel to experience the arts in person.

One of my favorite aspects of performing in community centers is being able to talk with our audiences during and after our concerts. People are fascinated by what we do as artists and are interested to learn about our stories. Though Melanie and I would tailor the specifics of what we would say to each performance, the bottom line was that we always wanted to establish a connection with our audience.

In every performance, Melanie and I talked about our lives at Juilliard and our instruments—the Baroque flute and the harpsichord—and compared them to their modern counterparts. We talked about how the music that we played was often heard in small and intimate rooms similar to the ones that we were in. Also, to help our “old” (mostly pre-1800) music come alive, we placed it in a historical context, telling stories about the composers and the spaces where the pieces were originally performed.

We also passed around pictures of places where the musicmaking happened, such as the palaces of Versailles and Sanssouci. When we were at an Alzheimer’s care center, some residents and family members connected with the music and the pictures, fondly remembering when they had visited these places in the past.

In between pieces, we passed around copies of manuscripts that we played from and explained that many of them were similar to mixtapes which people use to collect music they like. We also talked about how the music worked similarly to a jazz lead sheet—Melanie would improvise and add ornaments to the written melody, and I would improvise chords and fills based on numbers over a bass line. In addition, we talked about playing together in an ensemble and how we converse with each other through the music. Sometimes we agree, and sometimes we interrupt each other and change the direction of our musical conversations.

At our last Gluck performance, Melanie and I played at a VA hospital for veterans who suffered from drug abuse and trauma. One of them made a very perceptive observation that it felt like there was an invisible string between the two of us. They were interested in the concept of improvisation and musical dialogue, and one of the veterans started to quietly improvise jazzy brush beats during one of our slow movements. After our concert, many of them came up to us and told us that the music really soothed their souls. One even said that the music was more effective than medications.

At every Gluck performance, I have witnessed how the arts can sharply affect and bless those around me. I think it is safe to say that all of us come to art through deeply personal experiences. Art, whether it be music, dance, theater, or whatever art form you partake in, lifts us from our problems, be it a moment of grace in the humdrum of a daily commute or something as immensely touching as a man with advanced Alzheimer’s hearing a piece of music and being able to flash back to memories of his sweetheart.

Art evokes feelings that are universal and yet extremely intimate. As artists, we have the ability to bring joy and healing to many people who might otherwise never experience it. This is an immense and wonderful responsibility, and I’m so thankful to the Gluck Fellowship for providing us with opportunities to take it on.