Juilliard to Open Campus in China 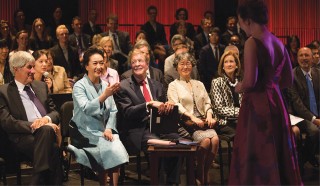 Juilliard history was made when President Joseph W. Polisi was joined by the first lady of China on September 28 to announce The Tianjin Juilliard School. The new school will be Juilliard’s first campus outside New York and the first performing arts institution to offer a U.S.-accredited master’s degree in China. It is scheduled to open in 2018. 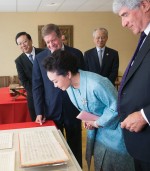 Peng Liyuan, China’s first lady, was in town with her husband, President Xi Jinping, for the United Nations General Assembly. The timing of the visit came shortly after China’s Ministry of Education gave preliminary approval for the new school’s graduate-degree program. While the possibility of a Juilliard branch in China was first made public in 2012, Polisi told the Juilliard community after the announcement that “the pace of planning will move faster” now that this preliminary approval has been granted.

The Tianjin Juilliard School is a joint project with the Tianjin Conservatory of Music, the Tianjin Binhai New Area CBD Administrative Commission, and the Tianjin Innovative Finance Investment Company. It will be designed by the architecture firm Diller Scofidio + Renfro, which also masterminded Juilliard’s 2006-09 renovation.

The school, Polisi said, is part of Juilliard’s strategy to make its artistic and educational expertise accessible to a wider public. “I believe that maintaining Juilliard’s prominence in the global performing arts landscape will depend on a robust series of programs to engage with a wide range of learners in different parts of the world,” he said. Toward that end, the school in China will offer a pre-college program, an instrumental training program, adult education, and public performances in addition to the graduate-level program, with the student body for the latter to be admitted by audition. Participants in the graduate program will be eligible to earn Master of Music degrees in orchestral and chamber music performance as well as collaborative piano. The school will have a permanent faculty and also guest faculty members, many of whom will be members of the Juilliard community.

In the press release announcing the event, Polisi noted that Juilliard’s global strategy also embraces its digital apps and K-12 curriculum development. “All of these programs are structured in a way that not only will preserve, support, and enhance the world-class performing arts education that Juilliard offers in New York, but provide new kinds of work for our alumni, build communities of support around the world, open access to new pools of talent, and position Juilliard as a leader in global performing arts education,” he said.

The announcement of The Tianjin Juilliard School was the culmination of Peng’s action-packed, if brief, visit to Juilliard. In addition to viewing treasures from the manuscript collection (autograph copies of Beethoven’s Ninth Symphony and Mozart’s opera The Marriage of Figaro), she and other visiting dignitaries were treated to several student performances, including the fourth movement of Brahms’s Piano Quartet in G Minor; an original dance choreographed to Chopin’s Posthumous Nocturne in C-sharp Minor; “O mio babbino caro” from Puccini’s Gianni Schicchi; a scene from Shakespeare’s Romeo and Juliet, and the performance of a traditional Chinese song known in English as “Flowing River.” For the last, Peng, who is also an acclaimed singer, gave some coaching to soprano Liv Redpath.