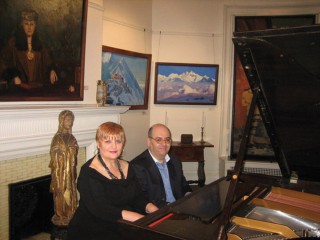 Vladimir Shinov and his wife, Marina Porchkhidze, performing at the Nicholas Roerich Museum in Manhattan.

A composer, performing artist, musician, and musicologist, Vladimir Shinov, who celebrates his 21st year as a Juilliard dance accompanist this month, was born and raised in Odessa, Ukraine. He got his master’s degree and a pianist’s diploma at the Petrozavodsk branch of the Leningrad State Conservatory, where he studied composition, music theory, and pedagogy. Among his many compositions are The Birth of Kantele, a poem for chorus based on the Finnish epic Kalevala; Beauty Nasto, a ballet; Ladoga, a symphony; and operatic and choral works based on texts by Pushkin, Shakespeare, contemporary poets, and old Yiddish folk poetry. He and his wife, Marina Porchkhidze, a pianist, frequently perform together. She owns and teaches at Marina’s Piano Studio in midtown and is also a composer.

How did you get your start in music?

When I was a child, my mother, Bela, often played Beethoven and Grieg on our old upright Wolkenhauer, and my heart just jumped out! I started picking up the tunes and became obsessed with improvising. I entered music school, where I studied piano and composition. At the age of 16, I wrote a sonata for violin and piano as well as romances and piano suites—and I decided to become a musician.

In 1983, I became a teacher in the music and theater course at the college of the arts in Petrozavodsk, in what’s now the republic of Karelia. Then Marina and I moved to the town of Pitkyaranta, where we established Tonika, a children’s music and theater school, where I taught piano, solfège, music literature, and composition, and I also directed the children’s music theater. As a result of my work with children, I wrote a piece about training in elementary composition for use in children’s music schools that was included in a book called Articles of Karelian Musicologists.

How did you become an accompanist?

In 1993, we moved to New York City. After meeting with the composer and dance musician Richard Cameron-Wolfe, I decided to become an accompanist at Ballet Hispanico and Peridance while also continuing my composing and performing careers. In 1994, I started playing for John Barker’s ballet classes at the New York School of Classical Dance, and since then I’ve played for ballet companies all over the world. And I still enjoy playing for young ballet dancers at the School at Steps.

What do you remember about your first day at Juilliard?

It was October 1994, and I accompanied Héctor Zaraspe’s (faculty 1972-2004) ballet class, playing my rendition of Bach’s Saint Matthew Passion. At Juilliard I’ve had the great privilege to collaborate with world-class faculty members who influenced me and gave me invaluable experience!

Someday I’d like to use my skills in the Juilliard Pre-College Division since I have a lot of experience in teaching composition.

Do you have two pieces of advice for aspiring accompanists?

First of all, keep watching the teacher all the time and feel the style he or she is expecting for the given combination. Secondly, you are here not just to provide pieces for dancers or surprise them by the originality of your approach to dance music. You are in charge of their intellectual and spiritual growth.

What are some of your favorite ways to spend your free time?

Reading, visiting museums—the Frick and the Museum of Modern Art are my favorites—swimming in the ocean, taking long walks in Manhattan, and collecting herbariums.

Marina and I have played piano duos all over the world including on radio and TV shows since 1981. In 2016, we’ll celebrate our 35th anniversary by giving a recital at Carnegie Hall’s Weill Recital Hall. During the last 15 years, we have played many concerts including five at Carnegie Hall, and we have recorded seven CDs together.