The Latest From Faculty, Staff, and Students December 2015-January 2016 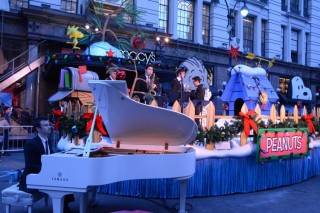 Dance faculty member Janis Brenner participated in the Women in Dance Leadership Conference in Baton Rouge, La., this fall. In November, Brenner was a panelist at the 92nd Street Y’s celebration of dancer and choreographer Murray Louis. She was a longtime member of Louis’s company and has restaged his works.

Dance faculty member Ray Hesselink was featured in an article called “Music for Tap” in the November issue of Dance Teacher magazine.

Faculty member Behzad Ranjbaran’s (MM ’88, DMA ’92, composition) Concerto for English Horn and Strings was performed in October at the Curtis Institute with Jan Krzywicki (’68, composition) conducting. The work was commissioned by Network for New Music for the centennial of Vincent Persichetti (faculty 1947-87), one of Ranjbaran’s teachers. Also in October, Ranjbaran’s Elegy for Cello and Strings was performed at Carnegie Hall as part of a concert called A Prayer for Peace. In September, Eugenia Zukerman (BS ’67, ﬂute) and Gary Levinson (BM ’88, MM ’91, violin) were among the performers of Ranjbaran’s Fountains of Fin on the opening night of the Copake, N.Y., Leaf Peeper concert series.

In November, there was a preview of New Dances: Edition 2015 at the Guggenheim Museum’s Works & Process Series. Lawrence Rhodes, artistic director of the Dance Division, discussed the creation process of the dances with the four choreographers.

Since it began in 1970, the New York Marathon has become one of the more beloved annual city rites.

This year’s edition had a number of Juilliard connections, starting with soprano Susanna Phillips Huntington (BM ’03, MM ’04, voice) singing the national anthem—and then running. Stephanie Yu (BM ’11, MM ’13, violin), who’d never run before coming to Juilliard because she was so busy practicing, started running a little every day as a freshman “just for mental health.” This year, she completed her first marathon, running the 26.2 miles a few days after turning 26. Other runners included veterans Lori Padua, director of planned giving, who was competing for the 12th time, and second-timer Marie Daniels (BM ’13, MM ’15, viola).