Billie Allen Henderson, who died on December 29 at 90, was a great friend of Juilliard, establishing a holarship in 2008 in memory of her late husband, the legendary bandleader and arranger Luther Henderson (BS '42, public school music).  Billie was theatrical royalty in her own right, having enjoyed a career that began as a dancer in the original Broadway production of On the Town (1944), continued with such milestones as being one of the first African-American actors to be in an ongoing network television program with a role in The Phil Silvers Show (1955-59), and taking part in the original cast of Lorraine Hansberry's A Raisin in the Sun (1959). 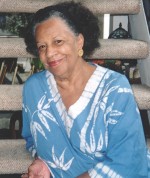 In more recent years, Billie devoted her formidable creative energies and powers of persuasion in supporting the development of young artists in multiple disciplines. She took particular pleasure in mentoring and guiding jazz pianist Kris Bowers (BM '10, MM '12, jazz studies), the first recipient of the Luther Henderson scholarship, in 2008. Billie spoke eloquently of having heard Marian Anderson in the legendary concert at the Lincoln Memorial in 1939— as she herself looked at Anderson as a beacon, several generations of young artists looked to Billie in much the same way. She was a gracious, vibrant, sly, witty, generous- hearted woman who expected the very best from all who were lucky enough to know her. She will be greatly missed.

Want to share your memories of Billie Allen Henderson? Let us know at journal@juilliard.edu.