Behind the Velvet Curtain 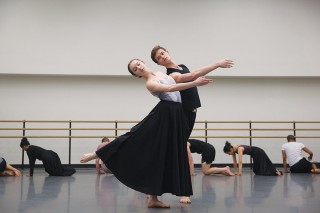 Mikaela Kelly and Joshua Guillemot-Rodgerson in a rehearsal for Paul Taylor's Roses.

Mikaela Kelly and Joshua Guillemot-Rodgerson in a rehearsal for Paul Taylor's Roses.

Justin Rapaport and Joseph Davis in a rehearsal for Jirí Kylián's Symphony of Psalms.

Mark Sampson and Dean Biosca in a rehearsal for Jerome Robbins's Moves.

There are numerous things that Dance Division artistic director Lawrence Rhodes must consider when selecting repertory for Juilliard's dancers. Do the dances offer appropriate technical and artistic challenges? Are they masterworks that New York audiences will be excited to see? How will the dances relate to each other from the audience point of view? Do the production costs fit into the budget? The path from idea to stage is rarely direct and can take years of research, planning and, in some cases, international diplomacy.

Katerina Eng in a rehearsal for Jerome Robbins's Moves.

Unlike performing a work of Beethoven, Brahms, or Shakespeare, producing 20th- or 21st-century dance means attempting to produce the dance exactly as it was originally seen—including the lighting, stage sets, costumes, and the intention of the choreographer. Since Juilliard does not keep dances in repertoire, it is most cost-effective to rent another production's costumes and sets. But before a piece of repertoire can be settled upon, the logistics must be investigated. Is someone available to teach the work to Juilliard dancers? Does a production exist? What shape is it in? Is it available? The Dance Division's production manager, Keith Michael, is charged with getting these answers. On more than one occasion, a rental has been secured only to discover the costumes are moth-eaten or rotten.

Choreographers, or their estates, have certain approved stagers for their work, many living far from New York. Other choreographers wish their work to be performed by major companies and need a bit of convincing to grant work to Juilliard students and within Juilliard's budget.

In putting together the repertory selections for this year's Juilliard Dances Repertory concerts (March 23-26), Rhodes started with his dream of producing Jiří Kylián's Symphony of Psalms (1978). It was long the signature work for Nederlands Dans Theater (N.D.T.), and Rhodes first saw it at as part of N.D.T.'s American debut at City Center in 1979, a performance that, he's said, brought him to tears. It's an enormous dance—16 dancers on stage, a huge orchestral score with chorus, demanding choreography, and the back wall draped in heavy carpets. In the years since, Rhodes often joked to Kylián, "I have to produce this before I die." Rhodes's first attempt was while he was director of Les Grands Ballets Canadiens de Montréal (1990-99) but, after at last securing it for the company, he left the directorship to return to New York before the season started. And while Rhodes has no plans to depart this world anytime soon, he has been working to get this piece produced at Juilliard for the better part of a decade. Securing the rights to the dance was not the stumbling block; finding a suitable production to rent was. After years of heavy use, N.D.T.'s costumes were in poor condition. The set for a production in Norway was designed for a stage much larger than Juilliard's. Costumes for a production in Lyon, France, had been stored in an asbestos- laden warehouse. The production at Les Grands that Rhodes had commissioned was being kept close to home for possible future performances. But in 2013, when Boston Ballet announced performances of an evening of Kylián dances—including Psalms—Rhodes sensed his luck was about to change. He went to Boston to see the production and talk with the company's directors. With the availability of French dancer and long-time N.D.T. company member Patrick DelCroix to come to New York and stage the work, and the production rental at last secured, Rhodes could finally build a concert around his dream program-closer.

Rhodes first saw Jerome Robbins's (1919-1998) Moves at an open dress rehearsal of Robbins's company Ballets: USA in 1959. Though it was created before the experimentation of the late 1960s, the dance is not set to music. Rhodes was in awe of the intrinsic musical values and demand for the dancers to be aware of themselves and each other in an unusually deep way. From the very beginning of their training, dancers are taught to minimize the sounds they make, to land jumps as quietly as possible, and any additional sound is covered by the accompanying music.

In Moves, the dancers' sounds are exposed and serve as the accompaniment, which can at first be unnerving for both the dancers and the audience. Ballet faculty member Jeffrey Edwards danced the piece as a member of New York City Ballet while Robbins was still involved in rehearsals. Of his experience dancing Moves, Edwards says that the more in tune the dancers are with each other, the more the dance creates a sense of community and the more the audience is captivated. For Juilliard dancers, who rarely perform work on pointe, Edwards says their training will help with the sense of weight, intention, and community but the challenge for Juilliard's dancers will be to learn to measure their eagerness and to stay in the moment for dramatic impact.

In selecting Roses by Paul Taylor (BS '53, dance) for the spring program, Rhodes was looking for an inviting curtain-raiser. Psalms is too emotionally heavy to open an evening, and he didn't want to begin with the silence of Moves. Taylor created Roses in 1985; he'd been inspired by the 1984 Olympics and wanted to make a dance that would exalt the dancers as the athletes had been. At once lyrical and gymnastic, Roses is also a program opener in Taylor's company. "It brings you in," says faculty member Linda Kent (BS '68, dance), who was in the original cast and is staging the Juilliard production. "It's like going into this perfect world." The dance opens with five couples, joined in the second half by a single couple; none of them leave the stage, meaning the dance accumulates as it progresses. Kent says Taylor thought of all the couples as different aspects of the same relationship. A note to the dancers in the Labanotation score quotes Taylor as saying, "you are them."

"One of the great joys of performing dance at Juilliard is that we have access to live music when appropriate," Rhodes said. It's not always possible for space and/or budgetary reasons, but this year, live music will be abundant, with 113 orchestra musicians, 41 singers, and 72 dancers. The seemingly giant orchestra will actually be two sets of musicians, one for Stravinsky's Symphony of Psalms and the other for Roses, which is danced to Baermann's Adagio for Clarinet and Strings and Wagner's Siegfried Idyll. George Manahan will conduct both. Psalms will also be performed by the Venture(NY) chorus, conducted by faculty member Kent Tritle (BM '85, MM '88, organ; MM '87, choral conducting). "Live music is a great thrill for the dancers and adds immeasurably to the impact of the performance," Rhodes said.

Interested in learning more? Check out this Evening Division course about the topic.