Romping Through the Playwrights Fest 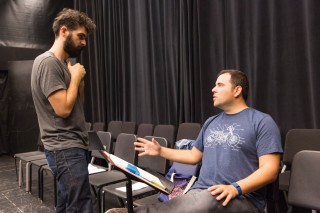 Former voice student Ted Malawer (Pre-College '02; Barnard-Columbia-Juilliard Exchange '06) returned last year as a playwriting fellow. In between, he wrote six novels and had his work developed and performed in multiple theaters. This year started with the September Playwrights Festival, in which plays by three fellows were workshopped by current acting students; Malawer's piece is called Daddy Issues: A Gay Romp Through History Starring Adolf Hitler! He chronicled his September 3.

8:30am The day begins with an iced coffee from Dunkin' Donuts and a walk in the park with Toby the dachshund. We're nearing the end of our third week of rehearsal for the Playwrights' Festival and I can't help it—I'm excited for school.

10:30am En route to Juilliard, I stop by a different Dunkin' Donuts for another coffee and some doughnuts for the cast. Everyone needs something sweet, right?

10:50am I step off the elevators and onto the third floor. We're rehearsing (and performing) in the Harold and Mimi Steinberg Drama Studio, only a few doors down from my old voice studio. Sixteen years ago, I came to Juilliard as a student in the Pre-College Division. I traveled in from Long Island every Saturday and got my first introduction to the rigorous training that Juilliard has to offer. I never would have imagined all those years ago that Juilliard would be my artistic home for so long and in so many different ways, but I'm grateful that it is.

11am Some of the cast members have graciously volunteered to come in early and run lines. Because Daddy Issues is a comedy, the pacing is incredibly important. We run lines for several different scenes—I've done this every day the past week and found it serves as a great warm up for the actors.

11:45am The room starts to come alive. Actors enter with their breakfast and new costume ideas. Our brilliant musical director, Henry Jenkinson, plays something fun on the piano, and our equally brilliant stage manager, Derek David, sets out the props.

Noon The official start of rehearsal. Actors get into costume. Suddenly the space is full of action, noise, life. Our fantastic director, Ed Iskandar, purposely takes “the worst seat in the house” to watch our run. Places are called. We're about to begin.

12:15pm The run-through starts. The previous weeks have been about figuring out the characters and actions of the piece, and now we're attempting to understand tempo and emotional journeys. It's thrilling to watch this play I've been working on for the past three years become a living, breathing thing.

2pm We finish the run and the actors sit for some notes. It has been such a joy to learn how Ed sees the play and watch him engage with the actors. He talks about the motor of the piece and the theme of repression, and how he'd like to see this come through in specific performances. Although the end result of a comedy is fun, the actual piecing together of one is a meticulous process.

2:40pm Lunch! A quick trip across the street to Indie for a sandwich and some more iced coffee. I might have a problem.

3pm Ed works through a scene, reblocking the staging to make it flow more efficiently. We try out a potential cut I've been mulling over, and it's successful. Some of the most important part of writing is rewriting—specifically trimming.

3:30pm We're lucky to have fourth-year dancer Riley O'Flynn assisting with our choreography. Today, Riley and another dancer demonstrate some beautiful moves for the love duet, which the actors integrate into the scene. Along with piano, singing, violin, and trumpet there are now lifts and spins. It's all coming together beautifully.

6pm Rehearsal is officially over. The actors pack up their costumes and the room is cleaned up. Next week, school is back in session, which will present another set of exciting challenges.

6:30pm Some of the cast and creative team grab a post-rehearsal drink to let off steam. It's fun to bond outside of the rehearsal room, especially for us writers—so much of our time is spent alone at a computer. Being part of a group of artistic minds is one of the best parts of the gig. Also there's candy on the tables.

8:30pm A quick dinner as I update the script to reflect the recent changes. Our stage manager has requested an updated copy and I don't want to disappoint him.

9:30pm A final walk for Toby the dachshund. The city is quieter than normal—so many folks are away for the holiday weekend. In a few days our cast will share the play with friends, family, and the Juilliard community. There will be singing, screaming, and (I hope) laughter. For now, though, I treasure the almost-silence.