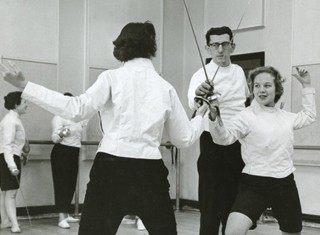 The September Time Capsule featured this photo of a fencing class; readers let us know that the teacher was Irving DeKoff, who was on the opera faculty on and off from the late 1940s to early 1960s.

(Photo by Impact Photos, Courtesy of the Juilliard Archives)
November 2016

Several readers contacted us about the September Time Capsule. Herb Zydney said he'd been at a concert in Alice Tully Hall when he'd seen the Journal photo. He identified the teacher as Irving DeKoff, who taught fencing in Juilliard's opera department from 1947 to 1951 and 1956 to 1962. Zydney fenced for DeKoff at Columbia, where he was head fencing coach from 1952 to 1967.

Steve Grund (Group 6) wrote that stage fighting was introduced into the drama curriculum for the first time when he was a third-year, in the fall of 1975. “We had heard of [well-known fight choreographers] B. H. Barry and Bill Hobbs, but no one had heard of ‘safe' violence on stage or how developed these techniques were. We studied rapier and dagger, broadsword and general physical illusion techniques like punching, stabbing, and, of course, the acting reactions that made all of it believable.” Oliver Reed's movie The Three Musketeers had come out while they were at Juilliard, Grund said, and “many of us were simply smitten with all of this. It was also a terrific macho distraction from taking dance. Also in that year, we took tumbling. We dug that too.”

As an original cast member and associate choreographer of Sophisticated Ladies on Broadway, I was concerned about your obit on Joe Temperley. [Temperley, a member of the Juilliard Jazz faculty from its founding, in 2001, died in May.] You seemed to have omitted his history-making stint as a member of the Duke Ellington Orchestra, which was billed as a specialty act because the orchestra was on stage and not in the usual pit position and made up of actual members of the Duke Ellington Orchestra as led by my father, Mercer Ellington, and billed as such. Throughout the stormy two-year stint, Joe remained a celebrated and stalwart member of the band and was revered by cast members and musicians alike for his dedication to the music and maintaining the integrity of same.
Mercedes Ellington (BS '60, dance), granddaughter of Duke Ellington