In sessions marked by reunions and good vibrations, Juilliard opened its doors to acclaimed jazz bassist Christian McBride for two master classes, held on September 27 and 28. The classes, attended by jazz and classical students alike, were given in advance of the October 1 Juilliard Jazz Ensemble concert, “A McBride Thang,” which featured the bassist’s music arranged for the student ensembles. With a combination of warmth and candor, McBride demonstrated why he is not only one of the premier performers on his instrument, but also one of the most sought-after educators and musical advocates in the jazz world. 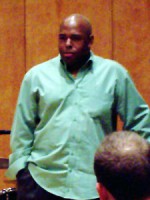 Bassist and alumnus Christian McBride gave a pair of master classes in September.

It was a return filled with memories for the 35-year-old McBride, who studied classical bass at Juilliard with the late Homer Mensch before launching his jazz career. “This is really incredible. Back when I was here they didn’t have a jazz program. To be back here now, and to have all these great students here—it’s something else,” he said, following a warm introduction by Carl Allen, interim artistic director of jazz studies. “Come to think of it, I think my freshman orientation was in this room,” a nostalgic McBride remarked of the third-floor studio.

The pleasantries quickly gave way to fast-paced and wide-ranging discussion. Responding to questions from students, he navigated topics ranging from the tuning of a bass drum to the progression of the jazz record industry. McBride was autobiographical at times, relating his experiences as a young jazz musician in New York to students at similar points in their careers. “The best thing you can do for yourselves is to play with musicians who are better than you are. They should embarrass you, make you feel terrible about yourself,” he said to appreciative laughter. “It will make you practice that much harder so that it won’t happen again. Then, when you get back on the bandstand, they embarrass you another time. I’ve learned that fear is a great motivator.”

“He was very humble and honest about how his career unfolded,” commented Pete Reardon-Anderson, a third-year tenor saxophonist. “When you interact with someone of his experience, you don’t want cookie-cutter answers. What he said was very sincere and useful.”

Second-year drummer Aaron Kimmel agreed. “We know Christian McBride’s music well from the records, but the classes gave us a chance to understand him as a person. When he told stories about struggling on the bandstand, it was something we all could really relate to.”

McBride is one of the most respected and influential musicians of his generation. The virtuoso bassist has earned acclaim as a composer and bandleader, and is a first-call sideman who has performed with a “who’s who” of jazz legends including McCoy Tyner, Freddie Hubbard, and Sonny Rollins. His career also extends beyond the jazz world: he has performed with James Brown and Kathleen Battle, collaborated with hip-hop artist Questlove, and spent a year as the bassist in Sting’s band. He also serves as the creative chair for jazz for the Los Angeles Philharmonic Association and is involved in major educational initiatives such as the National Jazz Museum in Harlem (which he co-directs with Juilliard faculty member Loren Schoenberg) and the Jazz Aspen Snowmass Academy in Colorado, where he is distinguished artist-in-residence.

While he brings a contemporary perspective to his music that often crosses genres, McBride also exhibits an old-fashioned grit developed from his time with jazz masters such as Freddie Hubbard, Bobby Watson, and Ray Brown. At one point in the class, he interrogated the students on their ability to play repertoire in all 12 keys, a hallmark skill required of jazz musicians.

“How many people know ‘Body and Soul’?” he asked, referring to the Jimmy Green standard, typically performed in D flat. Seeing a majority of hands in the room raised, he responded, “Who can come up, right now, and play the tune in A?”

The classes also included a wealth of practical advice, including the importance of interpersonal skills in maintaining a career. In particular, he warned the students to avoid the sense of entitlement that often comes with landing major gigs. A gregarious storyteller, McBride usually highlighted his points with humorous anecdotes from his experiences working for different bandleaders.

“He offered good perspective on the life of a freelance musician,” said fourth-year bassist Ryland Kelly. “He said that if someone wants to hire a new band, then you should let them do that—be grateful for the opportunity, and then move on to the next experience.”

The Friday session opened with McBride in a loose, back-and-forth dialogue with the participants. He seemed as interested in the students’ careers as they were in his, soliciting opinions on the New York session scene, performance opportunities, and career goals more broadly.

“I agree that the apprenticeship method, working as a sideman with older artists, is a good way to go,” he remarked during a long discussion of how best to build a career in jazz. “And contrary to what people say, there are still a lot of great gigs out there with those types of musicians.”

Technology, specifically the Internet, also prompted fertile discussion. While the Internet has offered jazz musicians new ways to promote their music, it has also brought dramatic changes to the recording industry and has added an additional layer of complexity for aspiring artists looking to manage their careers. “Even with all the new technologies, some old-time professionalism will get you through,” McBride said.

Drummer Marion Felder, a second-year master’s student, recognized the opportunities presented by Christian McBride’s visit. “There’s no question he’s one of the best musicians out there—but he also cares about younger musicians and their development. It’s a really valuable combination.”

Back to Basics with Ron Carter