2 Composers of Today, Drawing Inspiration From the Past 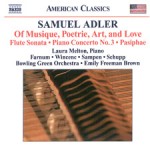 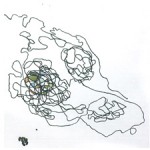 One could evoke a far lesser spirit than that of Debussy, whose Preludes for Piano inspired Juilliard composition professor Samuel Adler in his Three Piano Preludes (1999-2000), each dedicated to a different musician. Here they show off the agility of Laura Melton, whose outstanding pianism is a common thread on this recording. Adler, the 2009-10 recipient of Juilliard’s prestigious William Schuman Scholar’s Chair, then finds inspiration in six poems of Robert Herrick to create Of Musique, Poetrie, Art, and Love (1978). Soprano Elizabeth Farnum is the impassioned soloist, backed by Melton and flutist Carol Wincenc, who studied at Juilliard and now serves on the flute faculty.

Melton returns for Four Composer Portraits—short, pungent études written for Milton Babbitt, Ned Rorem, Gunther Schuller, and David Diamond—each using a melodic motif based on the composer’s first name. Wincenc and Melton return to sprint through the restless Sonata for Flute and Piano (2004), written for Juilliard’s 100th anniversary and premiered by Wincenc in September 2005. And in a nod to today’s interpreters, whom Adler notes “have no technical problems,” he wrote Soundings, here given a reading by alto saxophonist John Sampen, who fully confirms Adler’s observation.

Jackson Pollock’s 1943 painting Pasiphae, which hangs in the Metropolitan Museum of Art, inspired Adler’s 1987 piece for piano and percussion of the same title. It opens with a mysterious tranquility, but soon becomes more agitated, Melton’s piano sparring violently with the elaborate percussion battery masterminded by Roger Schupp. Melton concludes the program navigating the Hindemith-like passageways of the Piano Concerto No. 3, with Emily Freeman Brown conducting the Bowling Green Philharmonia. The finely detailed recording, by Mark Bunce at Bowling Green and Juilliard’s own Ryan Streber, was done at Bowling Green State University and at the American Academy of Arts and Letters.

In another, even more direct homage, Juilliard composition professor Christopher Rouse wrote his first string quartet in 1981, the centenary of Bartok’s birth. Equally interesting to Rouse, that year witnessed the assassination of Anwar el-Sadat, whose initials formed the basis of the quartet’s sixth movement epilogue. Movements one, three, and five each have three variations, with each variation further split into two parts—a section of repeated notes followed by one more spasmodic—whereas movements two and four are more freely structured. At the end, listeners may be surprised by the sorrowful tone of the finale, a brooding coda in contrast with the brutality of the earlier material. The Calder Quartet, Juilliard’s graduate quartet in residence from 2005 to 2007, digs into this gritty score with zest, and although Rouse is his own man, those who wish Bartok had written a seventh quartet won’t be disappointed.

Rouse’s String Quartet No. 2 was written in 1987, after his visit to the Soviet Union, and uses D, E-flat, C, and B (Shostakovich’s famous “DSCH” motif), beginning with a piercing Adagio marked doloroso. The middle movement, agitato, reminded me of someone dropping a huge tray of marbles all over the floor and watching them roll off in all directions. The final movement, marked lamentoso, uses material from the first two movements in a sorrowful descent that slowly winds down to a hush.

The program closes with Compline (1989), which gets its energy from the composer’s trip to Rome, where he took in the somber elements of the city’s history while observing the playfulness of its tourists. Using the same instrumentation as that of Ravel’s Introduction and Allegro, the Calder crew is joined by flutist Daniel Alexander, clarinetist Alicia Lee, who studied with Ayako Oshima and Juilliard’s Charles Neidich, and harpist Sivan Magen, who received his bachelor’s and master’s degrees from the School.

Engineer Silas Brown, working at the Performing Arts Center in Purchase, N.Y., has been especially careful to capture Rouse’s quieter moments, as well as the captivating bursts of adrenaline. All are hauntingly done by the Calders, and the composer clearly approves: he wrote his forthcoming Third String Quartet for the group.