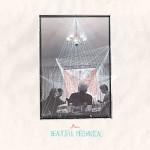 Bridging the divide between classical and pop, this exuberant sampler shows the chamber ensemble yMusic in the febrile energy of some of the country’s younger compositional heavy-hitters, coupled with a few wild cards like Son Lux. His Beautiful Mechanical, the disc’s title track, brought to mind a favorite painting, Paul Klee’s skeletal Twittering Machine. Lux’s jittery opus particularly shows off flutist Alex Sopp (B.M. ’05, M.M. ’07, flute), one of yMusic’s five Juilliard-trained members, and her rhythmic precision anchors this percolating romp.

One of the disc’s high points comes from Annie Clark (better known by her performing persona, St. Vincent) who wrote Proven Badlands for the group, and has C.J. Camerieri (B.M. ’04, trumpet) slinging both trumpet and horn for some big-band sounds that could have come straight from the1960s. Clark creates mellow warmth for cellist Clarice Jensen (B.M. ’02, M.M. ’04, cello) and violist Nadia Sirota (B.M. ’04, M.M. ’06, viola) to counter the brass sizzle.

From Shara Worden, best known as the lead singer for the band My Brightest Diamond, come two brief tracks: A Whistle, A Tune, A Macaroon, whose folk-song plumes appear as if from an ancient grotto, before disappearing into the mist. Later, her winsome A Paper, A Pen, a Note to a Friend uses spare textures that highlight each musician’s solo expertise, and creates the illusion of a close-up of an intimate pal’s handwriting.

Sarah Kirkland Snider’s gorgeous Daughter of the Waves (2011) also feels as if it comes from another era—but the inclusion of purring electric guitar (nicely done by Rob Moose, also the group’s violinist) is squarely 21st century. The swirling patterns of Judd Greenstein’s Clearing, Dawn, Dance (2010) owe a small debt to Philip Glass, with a prominent role for Hideaki Aomori (B.M. ’04, clarinet). But at the end, a mellow string chorale eventually takes over. Camerieri returns to the spotlight for the eloquent solo that starts Gabriel Kahane’s Song, with Moose softly strumming as if heard from the apartment next door.

Veteran engineer Dan Bora (who has worked with Glass since 2002) recorded the ensemble at Mission Sound Studios in Brooklyn. For a glimpse of the stylistic amalgam that defines some of today’s most eclectic musical minds, look no further.

With a title derived from a phrase by Antoine de Saint-Exupéry, “Night, when words fade and things come alive,” this disc (which comes with a bonus DVD) shows the expertise of piano duo Greg Anderson and Elizabeth Joy Roe, who each earned bachelor’s and master’s degrees at Juilliard, in 2004 and 2006 respectively. Anderson and Roe’s arrangements for two pianos (and piano, four hands) are often arresting, opening with a fierce take on Michael Jackson’s “Billie Jean.” The eclectic program continues with a Vivaldi aria, “Sento in seno ch’in pioggia di lagrime,” and then a glittering mini-fantasy, Papageno!, using three arias from Mozart’s Die Zauberflöte.

At just over 13 minutes, the duo’s imaginative rethinking of Bizet’s Carmen Fantasy could easily be an encore, as could the dark but sparkling arrangement of Schubert’s “Der Erlkönig.” Rachmaninoff’s “Vocalise” may be the best-known work here, and this affecting version—tender one moment, ferocious the next—is a wonderful addition to the many recordings of the piece in the catalog. Listening to the sweet strains of “Mathilde, Marieke, et Madeleine,” based on songs by Jacques Brel and Gérard Jouannest, feels like slipping into a smoky Parisian cabaret.

Sometimes Anderson and Roe wisely keep things simple, such as in Schumann’s “Mondnacht” from Liederkreis, Villa-Lobos’s famous “Lo, at Midnight” from Bachianas Brasileiras No. 5, and “The Glitt-ring Sun” from Thomas Arne’s The Morning. But the pair is equally well-suited to some of the higher-energy numbers, as in Coldplay’s anthem, “Viva la Vida,” an homage to the painter Frida Kahlo, and the feverish reading of Radiohead’s “Paranoid Android” from its album OK Computer.

To capture this smorgasbord, one could hardly ask for a more lauded engineer than Steven Epstein, a senior executive producer at Sony Classical and winner of 15 Grammys. He has given the duo—playing two Steinways—an appropriately vivid, detailed recording in the hall at SUNY Purchase.

A bonus DVD includes alternate takes of the Vivaldi and Michael Jackson tracks, plus the Carmen Fantasy, filmed for a live audience at the Historic Asolo Theater in Sarasota, Fla. With the duo serving as producers, directors, cinematographers, editors, and audio engineers, the electrifying Bizet brings down the house. But the prize might be Matthew Brown’s compellingly creepy film using the Schubert “Erlkönig,” with Roe falling off the piano bench before being sucked inside, as Anderson is beset by a bouquet of mysterious, not altogether friendly, tendrils.