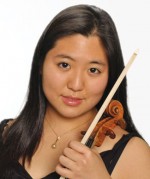 Although she grew up in Los Angeles in an acting family, Paton Ashbrook rebelled against theater until she was in middle school, when she started seeking it out. “It was just too deeply in me; I couldn’t do anything else as well,” she said. Ashbrook, who’s paying for her education herself, notes that she “literally couldn’t be at this school without these scholarships—they cover the tuition and fees and I get loans from the government and do whatever work-study I have time for.” Ashbrook also participates in the Gluck Community Service Fellowship program, through which she’s helping students in the Bronx work on a Shakespeare production. “I’m grateful for what I’ve been given, and I have a responsibility to provide that for other people too,” she said.

When Karen Cueva was 4, she cried nonstop until her mom, a single parent and recent immigrant, discovered that her daughter wanted to play the violin. So every week, the two would travel two hours on three buses each way for music lessons. Fast-forward to Juilliard, where Cueva has pursued her studies with Lewis Kaplan (B.S. ’58, M.S. ’60, violin)—and took any teaching opportunity she could. “I want to share my gift with people who don’t think they have the capacity to succeed because of their circumstances,” she said.

Having funding and, this year, opportunities to meet with her funders, “has taken such a burden off my shoulders to know that my efforts here are recognized,” Cueva said. “When someone says ‘we believe in you,’ that’s very powerful for your artistry. I hope that when I leave here, I won’t have just grown artistically, but also that I’ll be representing myself, my family, my Latino community—and that I’ll be able to share with others in a way that resonates with Juilliard’s mission of creating artists as citizens. My whole life, other people have shared with me, and I want to be able to give back.”

Dallas native Austin Goodwin has gotten together several times this year with one of his scholarship funders, arts patron Bootsie Barth. “It’s great having someone who’s not only supporting you financially but who’s also really interested in what we’re doing and offering other sources of inspiration,” Goodwin said. Having the funding “has allowed me to take full advantage of my time here. Obviously there are pressures regardless and bills that need to be paid, but these scholarships have made it less,” he added. “I think oftentimes we’re so wrapped up in what’s going on around us that we forget we’re here in this incredible place. These scholarships have helped me realize that and revel in it.”

Jennifer Liu, who arrived at Juilliard at 15 from Los Angeles to study in the Pre-College, learned last spring that she would be one of this year’s inaugural Kovner fellows. “It’s a cushioned amount of money, which is so nice mentally, physically, emotionally,” she said. Liu, who studies with alums Sylvia Rosenberg and Donald Weilerstein, was speaking just before spring break when, funded by the fellowship, she was going to a 10-day chamber music intensive in Prussia Cove, England.

“It can be tough to remember that what we do as artists is important—we don’t have a person’s life on the table after all,” Liu said. “But we really can impact people emotionally with our art and we have a responsibility to do so. The fellowship has given me the mental freedom to think about how to do that and to pursue my wildest dreams.”

Erika Mitsui is finishing up a bachelor’s in Near Eastern studies at Columbia through the Barnard-Columbia-Juilliard exchange program and also studying here with Ronald Copes and Lewis Kaplan. “Having funding has let music be my main focus here,” said Mitsui, a New Yorker. “It’s wonderful to be able to devote all my energies into becoming the best musician I can be.”

Working with international artists has been one of the highlights of her Juilliard career, Mitsui said, in particular a master class in which she worked on Bartók’s Second Concerto with Christian Tetzlaff. “It’s so fantastic to have these performers help you see what you need to do technically and artistically to become even better.”

Originally from Budapest, Nico Namoradze studied there and in Florence and Vienna before coming to Juilliard for his master’s. “In Europe, I didn’t have to pay for my education, and having funding facilitated my coming here and being able to work with my teachers, [alums] Emanuel Ax and Veda Kaplinsky. I’m immensely grateful,” he said.

Having funding has let Namoradze take advantage of more than just the Juilliard practice rooms—he’s also embraced composition and music technology. “The atmosphere at Juilliard really encourages you to go outside your comfort zone,” he said. “And interacting with actors and dancers and the other musicians has also been extraordinary—it’s really an incomparable atmosphere.”