John Adams Through the Years at Juilliard 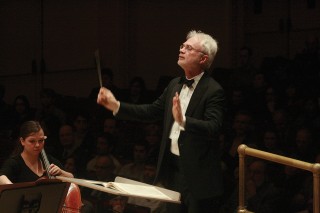 Composer John Adams has a long history with Juilliard. Six years ago this month, he conducted the Juilliard Orchestra in its only Carnegie Hall appearance that season (pictured, with principal cellist Bronwyn Banerdt). The program included Strauss's Don Juan, Op. 20, Bartók's Dance Suite, and Adams's City Noir. Later that year, he received an honorary doctorate and was the commencement speaker; two years earlier, he conducted a concert version of his opera The Death of Klinghoffer as part of the 2009 Focus! festival, and his music also was performed at the 2003 Focus!, which celebrated the works of West Coast composers. In 2012, Adams conducted a joint Juilliard-Royal Academy of Music orchestra in BBC Proms concerts.