1935
March 7, the Juilliard Student Club sponsored what they described as an antiwar meeting at which Dr. Harry F. Ward of Union Theological Seminary addressed approximately 100 students on the topic “Is the U.S. Headed for War?” 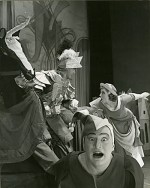