Juilliard’s newest new music ensemble, Axiom, continues its multipart residency at Le Poisson Rouge this month with a mini-series of contemporary Finnish music. Music director Jeffrey Milarsky will present a variety of works by a trio of composers whose pieces are well known in their native country and abroad for their striking originality and attention to sonic detail. An attempt to definitively categorize the output of Magnus Lindberg, Kaija Saariaho, and Esa-Pekka Salonen would likely prove futile, and it is exactly this quality that Milarsky hopes to celebrate in two concerts, one at L.P.R. and the other at Juilliard’s Peter Jay Sharp Theater. 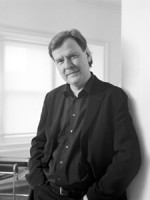 If one thing has come to be expected from Axiom, it is unpredictability. The programs contain compositions whose styles and instrumentation vary wildly. From unaccompanied cello to live electronics to chamber orchestra, and from the most severe post-tonal idioms to the positively Neo-Classical, Milarsky’s programming choices are certain to surprise and intrigue.

Magnus Lindberg’s music dominates the programs, each of which features one of his extended works for large chamber ensemble. Lindberg (b. 1958) was recently selected by Alan Gilbert to serve as composer-in-residence for the New York Philharmonic—in fact, his new work EXPO kicked off the orchestra’s new music director’s tenure—and is certainly one of the major players in contemporary music. These chamber works, however, offer us a different perspective on an artist who is now known primarily as a composer of massive orchestral scores.

“It might be accurate to consider [Lindberg] a postmodern Sibelius,” said Milarksy. “His orchestral canvases are just that: large tapestries utilizing waves of sound, harmony, and color.”

“The piece Ur, from 1986, which is the main piece being done on the Poisson Rouge concert,” he continued, “is really one of the most incredibly aggressive works for small ensemble and electronics. You can hear incredibly virtuosic densities being built up.  There are so many notes it’s hard to describe!” After composing Ur, Lindberg did not produce another major work for nearly two years. Once he took up the pen again, his work took a distinctly more Neo-Classical tone, a stylistic shift exemplified by his 1992 Clarinet Quintet, which will be performed at the concert in Sharp. Excitingly, Lindberg will be participating in the rehearsals for these concerts and will appear at Le Poisson Rouge to help introduce his pieces to the audience.

Also featured are works of Kaija Saariaho (b. 1952), whose mysteriously alluring music earned her the prestigious Grawemeyer Award for Composition in 2003, and of Esa-Pekka Salonen (b. 1958), who, though probably best known as a conductor, actually considered himself first and foremost a composer during his student days (he initially enrolled in Helsinki’s Sibelius Academy for horn performance and composition).

So, apart from shared passports, why partner these artists? Well, to begin with, they were all classmates at the Sibelius Academy and nearly exact contemporaries (oddly, Salonen and Lindberg were born only three days apart), during which time they co-founded an informal group of musicians styled the Ears Open Society. They shared a love for the avant-garde, which prompted Lindberg and Saariaho to pursue studies in Paris. When one listens to their music, though, it is clear that their musical personalities are far from carbon copies of one another. As Milarsky said, with these concerts he hopes to “celebrate a school of thought that’s not really unified. These composers really belong together, but they don’t sound like one another, and that’s what’s so beautiful about them.  What really sticks out is their originality.”

Milarsky also noted a very organic quality that characterizes their collective works.  “Lindberg is a great pianist and conductor as well. The same with Salonen,” he said.  “There’s a feeling when you play their music that they’ve had their hands on it. It’s a little like Mozart. When you’re playing a [Mozart] piano sonata, it feels like someone who knows this instrument wrote it. With Beethoven, there’s a struggle; he wrote brilliantly and awkwardly for almost every instrument. There’s something when I conduct Lindberg and definitely Salonen that feels really good … because I know that a real serious mind was at work. The music breathes within the notes. It even feels good to conduct.”

These three composers, of course, represent only a few of the phenomenal musical talents to emerge from Finland over the past several decades. So what is it about this country that makes musicians so successful? Is it the long winter nights which free the artist from distraction, or perhaps the purifying and therapeutic effects of the sauna? “I think it’s in the water,” joked Milarsky. In seriousness, he first cited the professor of conducting at the Sibelius Academy, Jorma Panula, whom he described as “the Zen master of conducting.” In addition, he noted that the Finnish “government is really supportive [of] a society in which artistry is valued highly.” He also doesn’t see these composers as representing any passing fads: “These people will be around, they’ll stand the test of time.”