Cellist Bernard Greenhouse, a founder of the acclaimed Beaux Arts Trio and a Juilliard alumnus who was on the faculty from 1951 to 1962, died on May 13 in Wellfleet, Mass., at age 95. 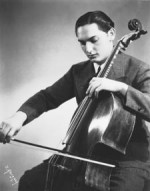 Born in Orange, N.J., on January 3, 1916, Greenhouse was admitted to the Juilliard Graduate School in 1933, when he was only 17. He studied with Felix Salmond and graduated in 1939, whereupon he became the principal cellist for the Columbia Broadcasting Symphony Orchestra. During his World War II Navy service, Greenhouse was the principal cellist of the Navy orchestra and played oboe in the Navy band.

In 1946, Greenhouse made his Town Hall debut and began studying with Pablo Casals. He was also the cellist for the Bach Aria Group from 1949 until the 1970s.

In a 1952 review, Harold C. Schonberg wrote in The New York Times that “Greenhouse achieved his usual norm of ’cello playing last night in Town Hall. Which is to say that his performances were unanimously well thought out, his technique equal to all demands, his musical taste well-nigh perfect.”

In 1955, Greenhouse joined with violinist Daniel Guilet and pianist Menahem Pressler to form the Beaux Arts Trio. In Guilet’s obituary in The New York Times, Greenhouse was quoted as having said, “When [Guilet] brought us together, it was to play some Mozart, just to make music and have some fun. He didn’t say anything about forming a trio, but I think he had it in the back of his mind. We got along together well, and that’s how it started.”

Originally the group’s goal was mostly to make recordings, but within months of its formation, the trio had made its debut at Tanglewood and was soon performing around the world. Philips recorded several hundred albums with the Beaux Arts Trio during Greenhouse’s 32-year tenure with the ensemble. Among the most acclaimed were Haydn’s complete piano trios, which were recorded in the 1970s and which won Gramophone’s Record of the Year award in 1979, and its Dvorak “Dumky” Trio, which was awarded the 1964 Grand Prix du Disque.

In 1987, when Greenhouse was retiring from the Beaux Arts, Allan Kozinn wrote in The Times that the ensemble was “the only piano trio generally regarded as being on the same plane of interpretive achievement as the world’s best string quartets.”

After leaving the ensemble, Greenhouse continued teaching and playing until he was in his 90s. In addition to Juilliard, he also taught at the Manhattan School of Music, Indiana University in Bloomington, Hartt School of Music, Rutgers University, SUNY Stony Brook, and the New England Conservatory of Music. He is survived by two daughters, Elena Delbanco and Nancy Carter-Menendez, three grandchildren, and five great-grandchildren. His wife, the former Aurora de la Luz Fernandez y Menendez, died in 2006.

In 2008, in a profile on National Public Radio’s All Things Considered, Greenhouse said, “I’m considered the old man of the cello right now. I don’t know of any [other] cellists over the age of 90 who are still performing. I fight against the closure of my ability, and I’m not going to let it happen.”