The Percussion Music of Japan

Percussion has been linked closely to ceremony and ritual throughout history. One need only think of Shamanistic drumming traditions of Asia, Santerían voodoo rituals of Haiti, Native American dancing/drumming ceremonies, ceremonial court drumming of Korea, or the Janissary music of the Turks. In Japan, the inherent ceremonial nature of percussion is front and center in the traditions of Noh and Kabuki theater, in the kodo drummers of Sado Island, in taiko drumming, and in the Gagaku music of the imperial court. Modern Japanese composers often seem to embrace this tradition, writing music of great power, drama, and mystery. On March 29, as part of Carnegie Hall’s Japan/NYC festival, the Juilliard Percussion Ensemble will present an evening of new and newer works from Japan at Alice Tully Hall. 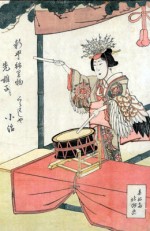 Drumming was a popular subject for Japanese woodblock prints (ukiyo-e) in the 17th through 19th centuries. This is one is by Shunchosai Hokushu, who worked between 1810 and 1832. The Juilliard Percussion Ensemble celebrates the music of Japan on March 29.

Any discussion of Japanese music in the 20th century must begin with the unique work of Toru Takemitsu. With his death in 1996, the music world lost one of its most eloquent and individual voices. Takemitsu’s music is characterized by an extremely refined sense of color and an understated emotional power. He seamlessly blended many diverse influences—Debussy, Messiaen, Cage, traditional Japanese music—into a music wholly his own, and was equally comfortable in the worlds of concert and film music.

Takemitsu’s music often dealt with themes or elements of nature, or literary references. His Rain Tree (1981), which the Percussion Ensemble will perform, is one of many pieces in the composer’s “waterscape” cycle that deals with imagery of rain, water, the sea, oceans, etc. It was inspired by the following passage by the novelist Kenzaburo Oe:

The tree is called the “rain-tree” because its lush foliage still sprinkles the previous night’s drops of rain onto the ground in the following afternoon. Its hundreds of thousands of fingerlike leaves store moisture, though other trees dry out in an instant. A clever tree, you must admit.

Akira Nishimura, who was born in 1953, writes music heavily influenced by the time concepts, rhythmic cycles and scales of Indian classical music, and the sound world of Indonesian gamelan. In Ketiak (1979), to be performed at the concert, he turns to the music of Bali, specifically a dance/drama based on the Indian epic The Ramayana. In this traditional folk art a small group of dancers is surrounded by more than 100 men imitating monkeys’ calls by chanting in a sharply pronounced rhythmic style. The chanters are divided into several groups that pass quick interlocking rhythmic patterns back and forth, depicting a famous battle. Ketiak is scored for four “chanters” who also play hand drums, claves and maracas; and two soloists (playing timpani and chimes) who play contrasting melodic material based on Indian ragas.

Jo Kondo holds a unique position in the world of Japanese music. He has written more than 130 works, mostly in an extremely minimalist style that emphasizes fragmentary repetition and gradual timbral shifts. Since the early 1970s, Kondo’s compositions have stood on a concept he has named “linear music” (“Sen no Ongaku”)—music consisting of a “line” of single notes, hocketted over different instruments. Over the years, the line of notes has gradually evolved a much thicker texture, as if it had been “harmonized.” However, unlike conventional harmony, Kondo’s “harmonizations” do not provide architectonic musical underpinnings; the sole role of these “harmonizations” (which provide a chord for each note of the “line”) is to imbue every attack with a specific “color” or “quality.” The Juilliard Percussion Ensemble will perform his Under the Umbrella (1976), which was written for the Canadian percussion group Nexus and is scored for 25 amlglocken (cowbells) and one gong. The combination evokes the world of gamelan, and the sound of some forgotten ancient ritual.

Hiroya Miura, who was born in 1975 in Sendai, Japan, has been active as a composer and performer in North America. He is also a founding member of the electronic improvisation unit, NoOneReceiving, and teaches at Bates College. About his Mitate, which receives its premiere at the concert, the composer wrote:

Mitate is a technique used in ukiyo-e images, as well as in other creative forms, in which many layers of meaning are layered atop one another, often to humorous effect; that is, a technique by which references to historical or fictional events or personages, or ideas, are embedded into images.

Award-winning composer Masakazu Natsuda was born in Tokyo in 1968, and he studied composition with Gérard Grisey at the Paris Conservatory. The Juilliard Percussion Ensemble will perform his Wooden Music, which was commissioned by Kunitachi College of Music Percussion Ensemble in 2008. It is scored for nine percussionists playing only nonpitched wooden instruments: mokusho, temple blocks, wood blocks, and log drums. Natsuda wrote:

Forests are homes to primates including mankind, therefore trees and human beings have always been inextricably linked. The hitting sounds that came from pieces of wood in one’s hands (perhaps rocks or bones . . .) would have been some of the first sounds that mankind produced besides their spoken words. The scene comes clearly to my mind as I live in a country (Japan) where most of the islands are covered in forests.

Please join us on March 29 as we survey the world of contemporary Japanese percussion music.